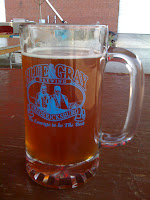 The 8th Annual Fredericksburg Oktoberfest takes place this weekend at the Blue & Gray Brewery. The brewery's new location allows for an expanded venue so there's plenty of room this year. I stopped by Friday afternoon and enjoyed a couple of 1/2 liter mugs of the Blue & Gray Oktoberfest. I always look forward to this annual offering, and this year's batch seems especially well-done. I picked up a growler last week when it was first released, enjoyed it over the weekend, and will surely go back for more.

The Oktoberfest celebration continues on Saturday, starting at 11:00AM, with activities all day until 8:00PM. German food will be available outside, as well as special menu items inside at Lee's Retreat. As always, this is a family event so bring the whole gang and enjoy the day.

On Saturday, Capital Ale House held it's second annual Oktoberfest in Fredericksburg. I was spending time with family in Maryland, and enjoying Polock Johnny's sausages and Guinness, so was unable to attend. Judging by the "live" updates I saw on Facebook, the estimated 15,000 folks attending had a great time. I'll point you to an article in today's Free Lance-Star for more information and pictures from the event.


With a swing of a mighty wooden mallet, Mayor Tom Tomzak kicked off Oktoberfest in downtown Fredericksburg at noon yesterday.

He hammered home a tap in the first keg, then handed a stein filled with some of its foaming contents to Evan Judd, a World War II veteran who took part in the Berlin airlift.

Western States like Colorada, California and Oregan get a lot of (well-deserved) attention for the the fine craft beers produced there. However, Virginia brewers continue to show the world that good beer comes from these parts too! Three Virginia breweries came home with medals from this year's Great American Beer Festival in Denver, Colorado.

Great American Restaurants (Sweetwater Tavern) in Centreville, VA brought home one medal:
Congratulation to these Virginia brewers! You can see the complete list of awards at GABF web site.
Mused by David No comments: 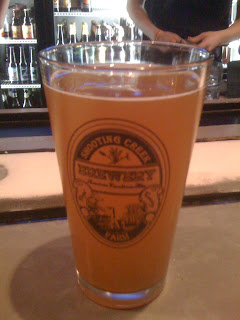 My experience with the two Shooting Creek beers left me looking forward to trying out more beers from this small, southwest Virginia brewery. While "Steal the Glass Night" is a fun excuse for adding to one's glassware collection, the opportunity to try new and hard to find beers is a true treat.
Mused by David 1 comment:

To All First Responders: The Blue & Gray Brewing Co. and Lee's Retreat Brewpub want to acknowledge and say thanks for the work you do. The brewery retail store is offering a free growler fill from 10am-1pm (ABC law states the pub can not process beer give-aways, so you'll need to enter the retail side). Lee's Retreat Brewpub, though, is offering a free pint glass on Saturday with the purchase of a beer in the brewpub during brewpub hours 11am-11pm.

During these specified times, this offer is available to all Police, Fire, and Rescue personnel, (federal, state and local) including volunteers this Saturday, September 11, 2010.

The folks at Blue & Gray have a long history of supporting our military and first responders. That tradition continues.
Mused by David No comments:

Craft beer fans, and fun-loving folks in general, will have two opportunities to celebrate Oktoberfest in Fredericksburg this month. (Yes, the Munich Oktoberfest actually does start in September.)

On September 18, the Fredericksburg Capital Ale House will celebrate Oktoberfest in downtown Fredericksburg with a block party in front of their Caroline Street location. The event will kick off at noon and continue until 10:00PM. This will be the second annual event for Capital Ale House in Fredericksburg. Entertainment will be provided by the SGTEV Hirschjager German dancers and German music by Heidi und Heimat, The Continentals & Low’n’Brows. A large children’s area will include three inflatable attractions, face painter and balloon artists. Food and beverages will be available. Other Richmond are Capital Ale House locations will celebrate Oktoberfest on September 24th & 25th, and October 2.

After you've spent the work week recovering, the party starts again the following weekend. The Blue & Gray Brewing Company will hold their 8th Annual Fredericksburg Oktoberfest all weekend long, September 24, 25, & 26. Family-friendly fun activities include sing alongs, a stein holding contest, Oompah music, ginger bread walk, K-9 demonstration, face painting for the kids, and the Low’n’Brows. And of course, plenty of the ever-popular Oktoberfest Beer from Blue & Gray Brewing will be available along with other Blue & Gray beers. See the event page for the complete schedule of events.

It's a great month to be a craft beer fan in Fredericksburg!

Update, September 7: This just in from Jeff at Blue & Gray, "VA ABC regulations require us to reduce our weekend event to 2 days, Friday and Saturday."  So plan your weekend accordingly.
Mused by David No comments: