It's an old joke that if you don't like the weather in Virginia, wait a few minutes and it will change. It's also true that the weather on a any calendar day can be wildly different from year to year. This is especially true in the winter. (In the summer, you can just expect it to be hot. Period.) White Christmases are rare here, but last year, we were treated to one of those uncommon events.

Over Christmas 2020 we experienced snow and very cold weather. That didn't stop me from enjoying the Rocky Patel A.L.R. Second Edition shown below. The full experience is recounted in this post. 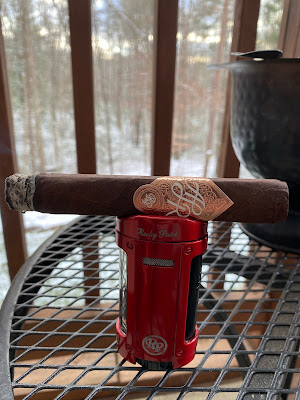 Christmas 2021 was at the complete opposite end of the weather spectrum. The day was sunny, and by the afternoon the temperature hit 71°. That meant smoking on the deck without the need for supplemental heating or winter clothing. 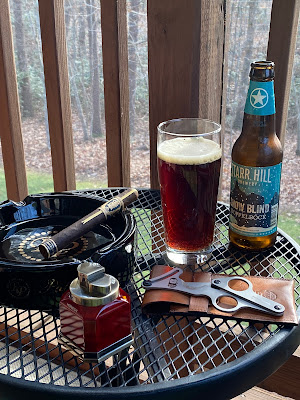 The difference in smoking experiences between the two years was remarkable when it comes to the weather. However, the pleasure of a good cigar is universal no matter the temperature.

When Are They Open?

I get that not everyone is adept at online marketing and social media. But clearly telling customers when you are open should be pretty simple. And a priority. While researching a local brewery to visit during my vacation, I came across this confusing mess.

First, I checked the brewery website for their hours.

Maybe I'll visit on Wednesday or Thursday, I thought.

Next I looked at their Facebook page and saw a slightly different schedule.

Then I started scrolling through the brewery's posts, and saw a post labeled "Winter Hours."

So, Wednesday is out? Monday or Tuesday? Which listing is current, and correct?

Maybe I had better call them.

"And the Grinch, with his Grinch-feet ice cold in the snow, stood puzzling and puzzling, how could it be so? It came without ribbons. It came without tags. It came without packages, boxes or bags. And he puzzled and puzzled 'till his puzzler was sore. Then the Grinch thought of something he hadn't before. What if Christmas, he thought, doesn't come from a store. What if Christmas, perhaps, means a little bit more." --Dr. Seuss
All through the lead up to this most joyful season, I was often shocked to hear people lamenting that the supply chain issues would "ruin Christmas." I was amazed as various mayors, governors, Fauci, and even the resident of the White House, for the second year, threatened Christmas gatherings. I could only shake my head at the ignorance of those talking, and those believing the pronouncements.

When the angels went away from them to heaven,

the shepherds said to one another,

“Let us go, then, to Bethlehem

to see this thing that has taken place,

which the Lord has made known to us.”

So they went in haste and found Mary and Joseph,

and the infant lying in the manger.

When they saw this,

they made known the message

that had been told them about this child.

All who heard it were amazed

by what had been told them by the shepherds.

And Mary kept all these things,

reflecting on them in her heart.

Then the shepherds returned,

for all they had heard and seen,

just as it had been told to them.

Christmas is here. The true source of our joy, the Nativity of the Lord, is celebrated beginning today. Despite shipping woes. Despite commercialism. Despite fascist decrees about "shots," and travel and gathering restrictions. This glorious Feast is upon us. And it had nothing to do with the White House Minister of Propaganda claiming "we've saved Christmas."
As I remind people often, the season of Christmas only begins today, December 25. This joyous celebration actually continues until the Feast of Epiphany on January 6. It is disappointing to see the celebrations stop abruptly the day after Christmas, as the lights and decorations suddenly vanish. Surely as Christians we believe the birth of Our Savior is an event worthy of more than a single day of rejoicing. During the troubling times we find ourselves enduring, there seems to be all the more reason to celebrate the joy of the season in its entirety.
However you mark the occasion, may it be spent with family, friends, and good cheer.
Merry Christmas!
Today is born our Savior Christ the Lord.
-- Psalm 96
Mused by David No comments:

Cigar and Whiskey on a Cold Evening

With the final Christmas decorations hung, and presents wrapped, Christmas Eve Eve offered time for an early evening repast with some bourbon and a cigar. I knew it would be getting cold quickly on the deck so I chose a smallish stick, the Rocky Patel Disciple in Robusto. I also had a bottle of Blade and Bow bourbon I had picked up a few weeks ago that was as yet unopened. That needed to be remedied. 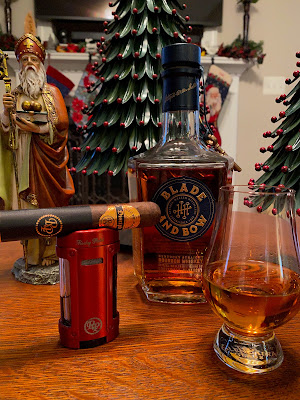 The Rocky Patel Disciple is a 2021 release. This 5 x 50 Robusto features a black and gold decorative sleeve and band covering adorning nearly the entire cigar. Coincidently, very Christmasy. Once the paper sleeve is removed, a chocolate brown San Andrés wrapper is revealed. Nicaraguan wrapper and filler tobaccos make up the rest of the blend.
I had smoked another Disciple last month, and enjoyed it quite a bit. I got the same notes of espresso and cocoa, with a few spurts of black pepper. This time though, I'd rank the smoke more in the medium body range, rather than full. Different mood, different beverage, or different meal prior? Who knows, but still an enjoyable smoke.
The Blade and Bow remains a favorite. An easy sipper, it features notes of caramel and oak, with a hint of spice. It's gone great with every cigar that I've tried pairing. 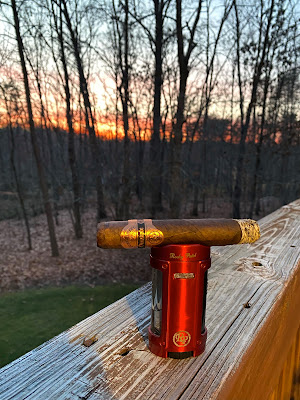 As predicted, the temperature dropped quickly when the sun set. As I was nearing the end of the cigar, I noticed that the Dark Sky app on my phone was reporting 37° with a "feels like" of 34°. For an hour the two propane heaters had provided sufficient warmth. As I was nearing the final puffs on the cigar, one of the heat sources ran out of fuel, signaling the end of an extremely enjoyable pre-holiday evening.

Ah, the Winter Solstice. My reminder that the days will now start getting longer, even if the average temperature remains miserably low. At least we've turned the corner on short days. This week, after errands and lunch out with Colleen, I relaxed on the deck with a cappuccino and a smoke. 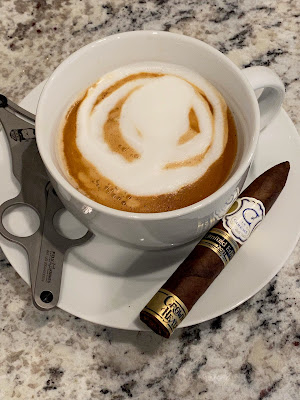 The smoke selection this afternoon was the Crowned Heads Le Carême Belicosos Finos LE 2021. I've mentioned this limited edition version of Le Carême in the past since the brand is a favorite. The medium bodied blend of sweetness with spice made an excellent pairing with the creamy espresso drink.
The coffee in the cup didn't last as long as the smoke, but I was enjoying the cigar immensely, so didn't feel compelled to venture inside to prepare another cup. And the temperature on the deck, supplemented by propane and electric heat, was made quite pleasant. With enough good beverage and cigars, we'll get through the winter yet.
Mused by David No comments:

The weather last Saturday a bit out of the ordinary, especially for a mid-December day. But, this is Virginia, so no weather pattern can really be classified as unexpected. The day was cloudy and windy, though the temperature rose to 70° by mid-afternoon. After hanging Christmas lights in the morning, I headed to the porch with a cigar and a beer.

My beverage selection was the 2021 Anchor "Our Special Ale." The Winter Warmer style ale pours a deep brown shade with a stiff and long lasting beige head. I was surprised by the thick head during the first pour and nearly overflowed the glass. The aroma has notes of dark bread, nutmeg, and ginger, all with a faint rum-like undertone.

Sipping brings forth a pleasing combination of roasted notes, molasses, mild holiday spice, and citrus. The profile is balanced with no one flavor dominating. A lingering sweet malt and coffee comes out in the finish. Overall, a very tasty winter libation and one I'll enjoy frequently while it's available. 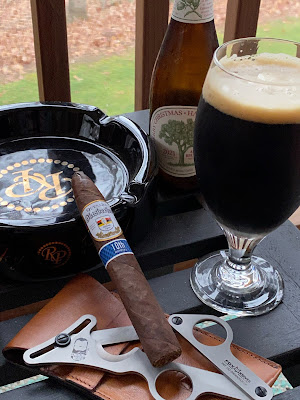 For the accompanying smoke, I decided to revisit the Quesada Oktoberfest 10th Anniversary I sampled last month. As expected, I got the same sweet, wood, and earth notes. Previously, my pairing featured an Oktoberfest beer, a combination that I found to be less than ideal. The Anchor Ale I opted for this time proved much more satisfactory. The richer notes of the beer provided a pleasing contrast to the cigar, and also seemed bring out a bit of toasted flavor in the smoke.
In keeping with the "dark" aspects of the pairing, the darkness of the weather increased as well. About halfway through my smoke the rains began in earnest. Due to the high winds, I could feel the rain coming through the screens of the porch. Relocating to the center of the deck, I escaped the moisture, but the dampness soon had me reaching for my sweatshirt. The thermometer still read 70°, which was actually up a degree from when I started the smoke, though it felt much cooler. The loud rainfall did force me to turn the volume up on my music, but it was still an enjoyable afternoon.
Returning inside, Colleen informed me the pot of bison chili she'd been working on was ready to serve. The meal provided a fine finish and perfect warm up from the time spent outside.
Mused by David No comments: