We don't get too many white Christmases in these parts. When we do, it's an exception, and then usually a blizzard. What a treat it was to walk out of church Christmas morning and see snowflakes falling from the sky. As we celebrated the day, I kept watching the temperature outside. By mid-afternoon, my phone was showing this: 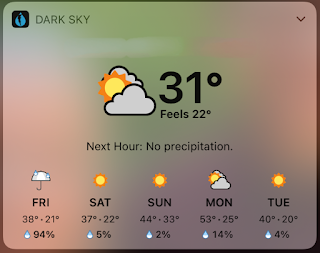 That would be as good as it gets. So I bundled up, made a large cup of coffee, and set up the portable propane heaters on each side of my chair on the screened porch. I grabbed the Rocky Patel A.L.R. Second Edition I've been looking forward to, and had been saving especially for Christmas. 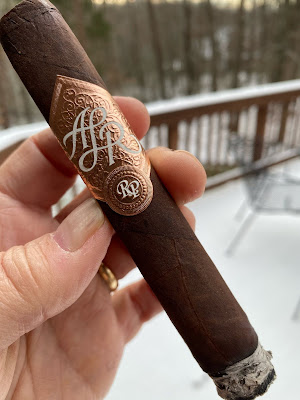 The 5½ x 52 box-pressed Robusto has a Mexican San Andrés wrapper with a Honduran binder, and filler tobaccos from Honduras and Nicaragua. It sports a shiny embossed gold band. There was also a large band with marketing covering almost the entire cigar. With large band removed, the cigar has a classy, holiday-worthy appearance.
The A.L.R. Second Edition starts out with a bold pepper kick, but the spice mellows quickly. Full notes of espresso and cocoa follow. There's a touch of sweetness that lingers on the tongue. I've smoked a few of these before and it's always a consistent performer. Even with the box-press shape, and occasional cold breeze whipping through the screen, the burn was even, needing not a single touch up. 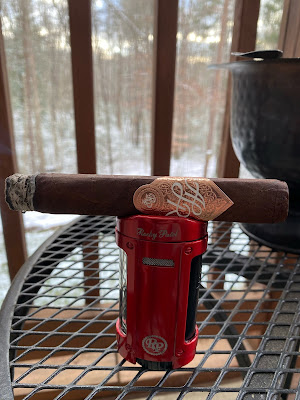 The cigar, which I held onto until it began to burn fingers and lips, lasted just over an hour. That was exactly the right amount of time given the weather. Though cold, the scenery was delightful to look at. And there wasn't enough snow to require any shoveling! I was thankful for the invention of the portable propane heater, but in the open space, there's only so much it can do. Looking ahead, it seems I took advantage of some of the "warmest" weather expected over the next few days.
Mused by David