I haven't used my outdoor range membership all year. Since we recently paid the annual membership fee, I figured I'd go see if it's actually still there. I decided to take the Compact SIG P320. I had only shot that gun once this year, and that was for a pathetic attempt at the IDPA classifier in the summer. Between the cold weather and ammo shortage, I had the place to myself. 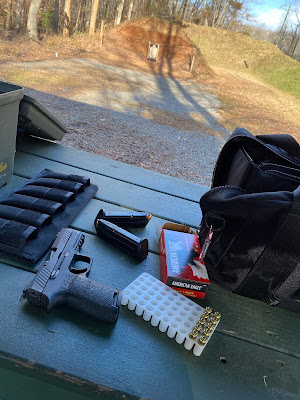 As a quick warmup, I shot 10 rounds at the head of an IDPA target at 7 yards, then moved back to 10 yards for the next 40 shots. Those shots were random combos of body shots, head shots, from low ready or the holster. The rules at this club state that no more than two shots may be fired in a string, and there must be a break between two shot strings. The length of the pause is undefined and varies on the mood of the club officials and their friendship with the shooter, so I was overly cautious.
I soon regretted only bringing along 100 rounds of ammunition. For the second box, I put out a target consisting of various sized shapes and shot from 10 yards. The rest of my shooting was mostly single shots, focusing on sight alignment and trigger press. I even devoted some time to SHO and WHO shooting.
Overall, I was pleased with how I shot the compact gun. I especially enjoyed to chance to just relax and do some shooting, even if only for a short time. While any benefit of "practice" may have been limited, the pleasurable diversion was welcome. I did not see or hear, any other shooters during my time at the range. I did wave to the camera in the tree, knowing I wasn't truly alone. If I find time in the new year to return, perhaps I'll bring a little more ammo.
Mused by David