By the President of the United States of America, a Proclamation.

Whereas it is the duty of all Nations to acknowledge the providence of Almighty God, to obey his will, to be grateful for his benefits, and humbly to implore his protection and favor-- and whereas both Houses of Congress have by their joint Committee requested me to recommend to the People of the United States a day of public thanksgiving and prayer to be observed by acknowledging with grateful hearts the many signal favors of Almighty God especially by affording them an opportunity peaceably to establish a form of government for their safety and happiness.

Now therefore I do recommend and assign Thursday the 26th day of November next to be devoted by the People of these States to the service of that great and glorious Being, who is the beneficent Author of all the good that was, that is, or that will be-- That we may then all unite in rendering unto him our sincere and humble thanks--for his kind care and protection of the People of this Country previous to their becoming a Nation--for the signal and manifold mercies, and the favorable interpositions of his Providence which we experienced in the course and conclusion of the late war--for the great degree of tranquility, union, and plenty, which we have since enjoyed--for the peaceable and rational manner, in which we have been enabled to establish constitutions of government for our safety and happiness, and particularly the national One now lately instituted--for the civil and religious liberty with which we are blessed; and the means we have of acquiring and diffusing useful knowledge; and in general for all the great and various favors which he hath been pleased to confer upon us.

and also that we may then unite in most humbly offering our prayers and supplications to the great Lord and Ruler of Nations and beseech him to pardon our national and other transgressions-- to enable us all, whether in public or private stations, to perform our several and relative duties properly and punctually--to render our national government a blessing to all the people, by constantly being a Government of wise, just, and constitutional laws, discreetly and faithfully executed and obeyed--to protect and guide all Sovereigns and Nations (especially such as have shewn kindness unto us) and to bless them with good government, peace, and concord--To promote the knowledge and practice of true religion and virtue, and the encrease of science among them and us--and generally to grant unto all Mankind such a degree of temporal prosperity as he alone knows to be best.

Given under my hand at the City of New York the third day of October in the year of our Lord 1789.

Have A Happy Thanksgiving! I wish you a day filled with family, friends, and fond memories. May God bless your life with His gifts today and everyday.
Mused by David 1 comment:

This Never Gets Old

It just wouldn't feel like Thanksgiving if I didn't laugh at this again.


"As God is my witness, I thought turkeys could fly."

It Was a Cold IDPA Match

Over the weekend, I joined a couple of friends as we traveled across the Potomac River to shoot the monthly IDPA match at Sanner's Lake in Lexington Park, MD. Leaving before dawn, and feeling the cold morning temperature, left me questioning my choices to start the day. As the sun rose, it gave very limited relief, with the thermometer barely cracking 50° all morning.

The first stage our squad shot started us facing both near and far targets from behind a barricade. Then we moved down range, engaging targets in the open as they appeared. Arriving at the end of the course, we found both threat and non-threat targets behind a stack of barrels. Shooting the course -0 was a nice way to start the day. 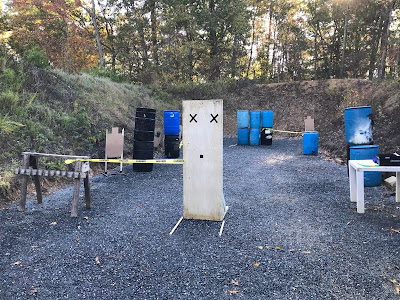 The next stage I thought offered a fun course of fire. From the start, we engaged an open target with six rounds, then turned to shoot a couple distant targets that were partially hidden behind a non-threat. Moving to the next point of cover, the course ended with a few more partial targets, with more non-threats restricting open shots.

The fun course became less so for me as I arrived at the first point of cover. As I looked around the barrel, the rising sun hit my right through the side of my glasses. I moved back a bit but the damage was done. I had a bright yellow spot burned into my vision that remained for the next 20 seconds or so. It made the sights on the gun hard to see. I did my best to get through it, but ended up hitting a non-threat and earning quite a few points down. Disappointing, but the match goes on even after a little adversity.

The stage labeled "Carnival" was probably my favorite of the match. We started the course of fire standing at a table, with a tennis ball in our strong hand. Down range were three targets, placed in different orientations, which were partially obscured by a both a non-threat and a row of bowling pins placed on barrels. Moving just slightly side-to-side allowed the shooter to get shots at the targets around the obstacles. Of course, shooting the bowling pins out of the way was an option, but that wasted both time and ammo. 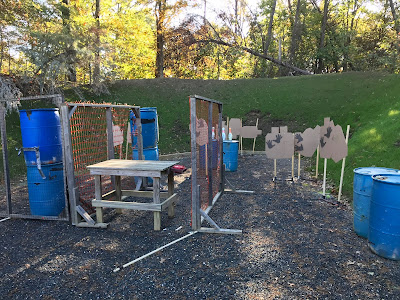 After engaging that first group of targets, there were more targets to be found by moving to the left and shooting through a port, and by also moving right and shooting around the wall. The targets to the left were challenging in that a fairly heard lean was required at the fault line see the targets. The array of three targets and three non-threats on the other side offered an especially deceivingly target array. The non-threat covering the center target also extended behind the most leftward target. Taking the "open" shot to the center -0 would also lead to a shoot-through — right into the head of the non-threat. And it did catch some folks.

Next up was a straight forward "Standards" stage. Four paper targets, requiring three hits each, and four steel poppers were placed down range of a barrel barricade, half visible from each side. It was a quick shoot and resulted in my best stage finish of the match, — 6th overall and 2nd in SSP. 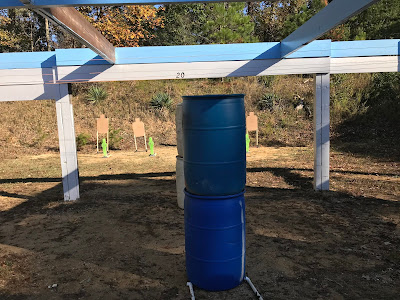 After the steel, the next challenge face was a course of fire combining both distance shooting and head shots. To add to the interest, this was a limited stage which meant there would be no make up shots. We began with six rounds in the gun, and engaged three distant targets partially blocked by non-threats. Then while reloading we advanced to shoot three head shot only targets from behind a barricaded of barrels. I felt really good while shooting this stage. Even my fingers were beginning to warm slightly. As I was engaging the head shots, I could see the hits on the heads. I probably got a little too confident and rushed the very last shot, pulling it off target for a miss. 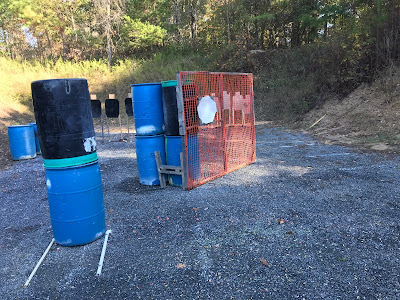 The last stage our group shot was a two string course requiring both strong and weak hand shooting. Three close targets were placed to the rear of two non-threats. The first string required 5 body hits and 1 head shot on the center target, all shot weak hand only. The second string was shot strong hand only and called for 5 body and one head on each of the two outside targets. This was one of two -0 stages I shot this day.

It was a good morning of shooting, despite the cold. The one sun-blinded stage did have an adverse affect my overall finish. Despite that, I managed 16th of 52 overall, and 8th of 25 in SSP.  The match moved quickly and we finished all six stages in about 2 1/2 hours. The quick, well-run match is a welcome foil to the two hour drive each way to shoot it. The travel time is made also made more bearable by the company of friends. As is tradition, we shopped for distilled beverages after the match, and consumed a filling lunch at a local Mexican restaurant.

I think I was still feeling the chill later in the evening. A roaring fire in the back yard, watching the sunset, while enjoying with some bourbon and a couple good cigars, helped to finish the day a little warmer than it started. 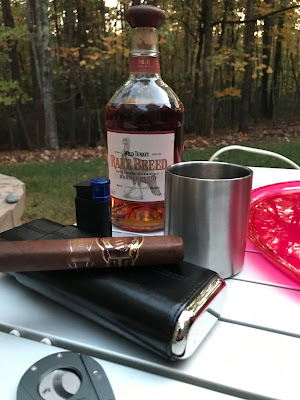