A Long Smoke and a Fire

For Christmas, Colleen gave me one of those iron kindling splitting stands. A couple days after Christmas, I headed out to my wood pile to try it out. In no time I had reduced a bunch of logs to smaller pieces. Placing the log in the stand and letting the weight of a sledgehammer fall on it sure beats swinging an axe.

Now that I had all this wood ready to go, it seemed a good time to have a fire. Besides the nice weather, it was still early in the afternoon so there was plenty of time for a longer smoke. I'd been eying the 7 ⅝" x 49 Tatuaje The Frank Redux 1 sticks in my humidor I had not had the time to smoke. I enjoyed one at the lounge at couple months ago so knew it was an 2 + hour smoke. Now was the time. 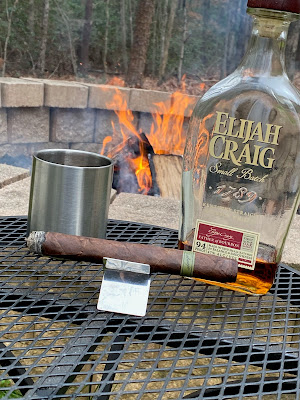 The Frank Redux is a re-release of the Frank, the first in the Tatuaje Monster Series, originally released on 2008. The hefty stick boasts a USA Connecticut Broadleaf Maduro wrapper, with Nicaraguan binder and filler leaves. The medium bodied smoke produces flavors of cedar and chocolate, along with a touch of sweet vanilla and nuts.
It didn't take long after lighting the cigar to realize it called for a nice bourbon accompaniment. I grabbed the bottle of Elijah Craig Small Batch to fill that void. Though it was early afternoon, I was vacation* after all. The moderate 94 proof provides a well-rounded profile of vanilla, oak, and caramel. A sweet and light warmth lingers in the finish. This is an affordable and satisfying bourbon that I try to keep on hand. (And as the photo reveals, is about due for restocking.)
I've been fortunate this year, during my attempted vacation, that Virginia has experienced relatively warm temperatures. Cool enough for a fire, but not cold enough to be need to huddle too close to the flame. As predicted, the The Frank Redux provided over two hours of pleasure by the fire before it was time to go inside for dinner.
* Vacation: A period of time where the demands of a job are limited to just a few hours a day.
Mused by David No comments:

Another year has come and gone. It was pretty much like the one before it. Standby for another one.

I do see some changes coming though. Not much longer will the "pandemic" be the basis for political overreach and profit. The "America is racist and something-phobic" agenda is being exposed. The clouds are gradually being removed from the eyes of even the CNN and MSNBC watchers. Maybe there's a light at the end of the tunnel.

At least the days are getting longer. 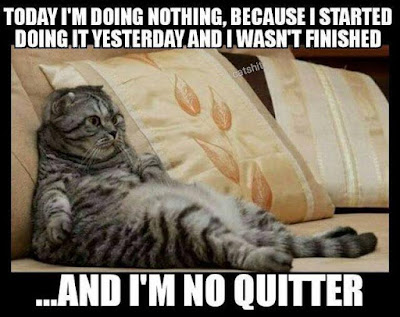