Still No Fire in the Fire Pit

I often enjoy looking through old photos on my laptop to see what I was doing at this time in years back. One thing I've noticed recently, that in years past, we've already enjoyed several fires out back by now. This year, between frequent weekend trips and day after day of wet weather interspersed with warm temperatures, it just hasn't happened this fall. Yet. 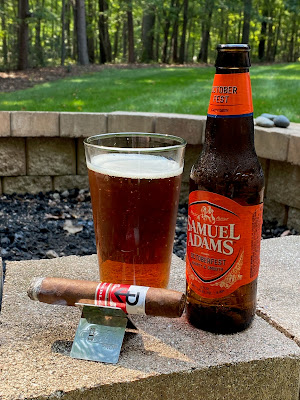 The closest we've come so far this season is siting around the pit a couple weeks ago, using it as a foot rest. The condensation on the bottle above illustrates just how warm it was, even in the shade. Despite the absence of the wood fire, it was an enjoyable respite.

Soon, real soon, we'll be enjoying wood smoke along with the tobacco smoke. If it would just stop raining…

As fall arrives, so does the realization that I have unused vacation time at risk of loss. My employer has a generous leave policy, but that policy also allows for no banked time. "Use it or lose it" is the rule.

As such, I've been striving to put in real "time off" before the end of the year, mostly in the form of long weekends. A few weeks ago, we managed a three day weekend away.

Our first evening at the VRBO farmhouse, to help recovered from the time on the road, included a good bourbon and cigar, naturally. 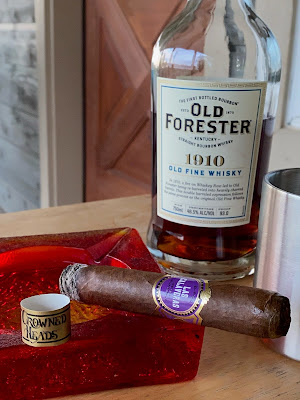 The Old Forester 1910 Whiskey is a libation I've been enjoying frequently of late. It's got just enough spice to be interesting, but is readily sippable, leading to frequent topping off of the glass. The accompanying smoke was the Crowned Heads Las Calaveras Edicion Limitada, 2020 vintage. I'd saved a single stick of both the 2020 and 2019 releases. Now that the 2021 edition is released and represented in my humidor, I've decided to smoke those reserves. The stick was much as I remembered with sweet, earthy notes and a hint of pepper and spice. As a side note, I had smoked the 2019 stick earlier in the week and found the flavors significantly muted after the two year rest.

The following day featured an afternoon smoke and beer on the patio, enjoying the mountain and farm scenes in the distance. Highland Brewing Black Mocha Stout is a beer we brought back from a recent trip to western North Carolina. The malty stout features deep roasted grains and chocolate for a robust flavor profile, with a very low 5% ABV. 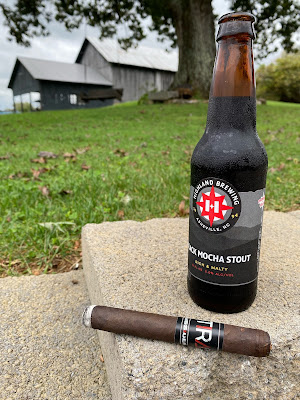 The Dissident Tirade cigar is by Oveja Negra, whose brands also include Black Label Trading Company and Black Works Studio. The stick sports a dark San Andres Mexican wrapper hiding an Ecuadorian binder and Nicaraguan, Dominican fillers. The bold cigar stood up well to the equally robust beer. The matching color schemes of the beer and cigar labels were a coincidence I noticed when staging the photograph.

The long weekend culminated, like many of our fall trips, with a college football tailgate and game. I might be accused of looking forward to the tailgate cigar as much as the game itself. This pre-game celebration featured an old favorite, Fratello Navetta Inverso. 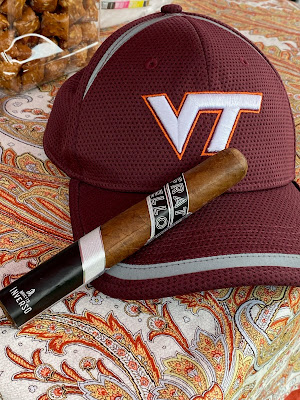 The Navetta Inverso puts a Nicaraguan Habano wrapper over an Ecuadorian binder and Nicaraguan and Dominican fillers. The cigar has cedar and earth notes, with hints of sweetness. Some subtle pepper makes the occasional appearance as well.

After a long weekend featuring an abundance of good smoke, drink, and food, the return to the work routine was surprisingly bearable. It also made me start planning how to use up the rest of those days before January 1.

It's been a while since I've posted here. I figured I owed the one or two of you who visit here an update.

No, I haven't succumbed to the Wuhan Flu, nor even had a taste of it. Despite the lack of content the last two months, I'm still enjoying good beer and bourbon, smoking cigars regularly, and we're frequently traveling over long weekends to do fun stuff. Unfortunately, I haven't been shooting as much as I would like, but that should change after college football season.

So why the lack of posts? Honestly, and frankly, I ran out of things to say. Here's a cigar and the beverage I enjoyed with it. Here's a description of the match I shot. It all got repetitive. Let's face it, life has been a bit of a broken record of late.

On top of that, work is busy -- in a good way. But after living on the laptop all day, tapping on it during my relaxation time became a bit uninspiring.

October 6 marked the 14 year anniversary of these Musings. I'm a bit disappointed that it wasn't celebrated with a post. But, that is what it is. There will be more posts coming at some point, so the blog isn't dead.

Meanwhile, I am still quite active on Instagram. It's quick and easy for me to check in over there. That feed is focused mainly on cigars, craft beer, and bourbon. If that interests you click the link here or the graphic over in the sidebar.

That's the update. It's Friday and I'm headed out for a cigar and a beer or two.