A Cigar for a Feast Day

Saturday, December 12 was the Feast of Our Lady of Guadalupe. The day honors the appearance of Mary to St. Juan Diego in present day Mexico City on December 9, 1531. Also, referred to as The Virgin of Guadalupe, she is the Patron Saint of the Americas. Among the traditions of the Feast, is a focus on the image of the Lady left on Juan Diego's tilma during the appearance. In honor of that, I selected an appropriately decorated cigar to enjoy that day. 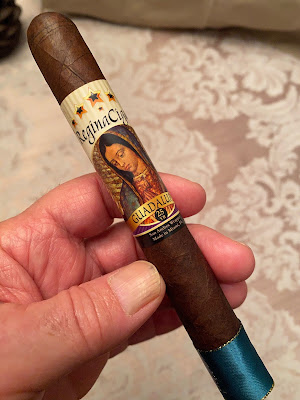 Guadalupe 25th Anniversary Limited Release Miami Edition Blend is a new release from Regina Cigars. The Miami cigar company donates a portion of its sales to support persecuted & displaced Christians, especially those in the Middle East. This blend celebrates the founder's 25th anniversary in the cigar industry and the significance of the December 12 date in his family.

The 6 x 50 stick has a San Andres Maduro wrapper and an Esteli Criollo binder, hiding a Corojo/Criollo Jalapa filler. The large band features a beautiful image of the Virgin Mary. The smoke is medium to full bodied. It has dark chocolate espresso notes, along with a mild cooling citrus note. Unfortunately both samples I've smoked so far had some damage under the decorative ribbon foot band causing the wrapper to unravel. A touch up with PerfecRepair allowed me to smoke through the damaged section without too much disruption. 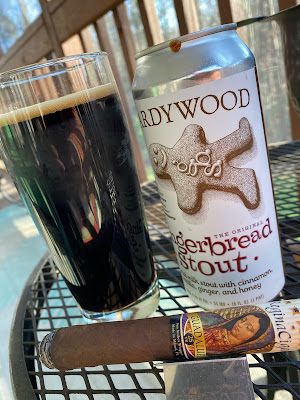 As an accompaniment, I selected a seasonally appropriate Hardywood Park Gingerbread Stout. This Imperial Milk Stout is part of a selection of "Christmas beers" released each year by the Richmond, VA brewery. The 9.2% ABV ale is brewed with locally sourced baby ginger and wildflower honey. The dark beer has a thin beige head and gives off but a faint sweet aroma. The flavor is predominately roasted malt and milk chocolate. The underlying spice kick of ginger and honey sweetness is mild. Mouthfeel is creamy and smooth. The flavor combination with the dark espresso notes of the cigar was a flavorful match.

The beer and the cigar made for a satisfying afternoon of relaxation on the deck. The mid-sixties temperature and bright sun was a welcome break from the doldrums of the cool, gray weather of the previous week.