It has been many months since I last was able to get to one of the monthly IDPA matches at the Rivanna Rifle and Pistol club outside of Charlottesville, VA. To my delight, everything aligned this month and I was excited to shoot and to see some old friends again. Given that I had missed the May match at the Cavalier club, I was looking forward to just getting in some range time. Even the weather cooperated; mostly overcast skies helped to moderate the warm temperatures.

The first stage our squad shot was a "standards" stage. There were three groups of three overlapping targets shot from ever shrinking shooting boxes as we moved through the stage. 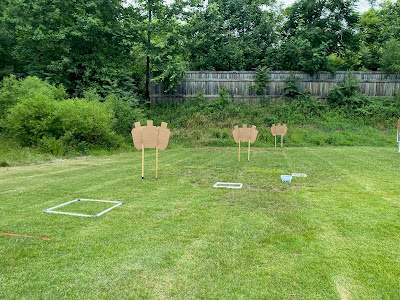 In an interesting twist, the center target in each array was declared "hard cover" for the targets behind it, meaning shoot throughs didn't count. That bit me on the last target array on the limited count stage. With that 5 second penalty, I was -6 on the stage. 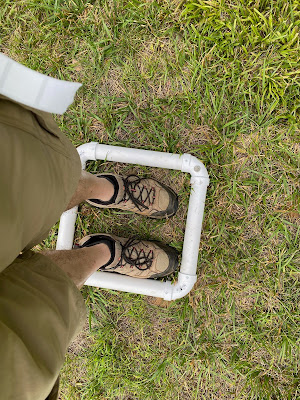 Next up was a scenario called "Room Clearing 101." We began sitting at a table with our unloaded gun and the first loading device on the table, and our hands on the laptop keyboard. The course required us to load the gun, engage a steel popper activator and a drop turner target while seated. Next we moved forward down the "hallway" to engage a target around a corner, before moving down the next hall where we encountered five more threat targets through an opening in the wall. 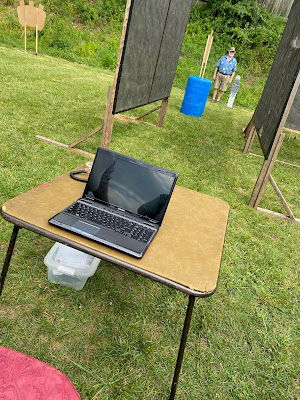 After the miss on the previous stage, I was very pleased to shoot this stage clean, with zero points down. Seeing the -0 holes on the drop turner target was especially satisfying.

Moving onto to another range, we saw an elaborate setup featuring two vehicles that made up the next two stages, "Fender Bender" and "Fender Bender-er." The stage brief stated that we were involved in a rear end accident while driving through Southeast DC. 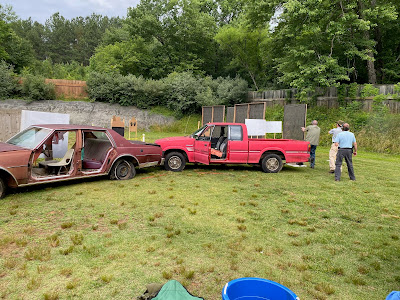 In the first scenario of the duo, we were said to be the driver of the car that was hit. We began standing at the rear of the car, with a hand on each vehicle, as it we were leaning over inspecting the damage. We were then attacked by gang members. There was a target to be engaged over the trunk, and another further away to the left in the open. Leaving the start position, we rounded the vehicle, engaging two low targets on the move. Heading down range we found two more threats behind a wall. Next we moved across the stage to find more threats from cover. 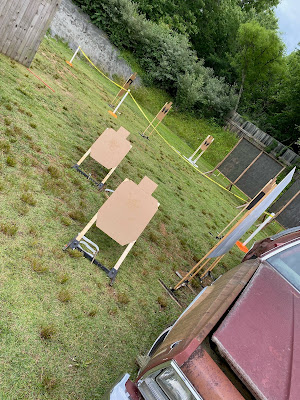 At the final shooting position I felt at the time I had pulled a shot wide on the first target. After engaging the last target I swung back to do a make up and found my gun at slide lock. A too quick calculation had me deciding to end the run. Sadly the wide shot was not just a -1 or -3, it was a miss altogether. In retrospect, I should have taken the time to reload and fired another shot. I can certainly reload and reengage in much less than the 5 seconds the miss cost me.
In the next scenario, we played the role of the person driving the truck that caused the accident. For the start we placed our firearm, loaded with just three rounds, on the seat of the vehicle. We started by leaning in the driver side door, with our strong hand on the seat's headrest, while holding a cell phone to our ear with the other hand. Again, the idea was to defend from attackers taking advantage of the situation.
After engaging a partial target through the car with three rounds, we moved to the back of the vehicle to engage a target on the move before hitting a stomp place to activate a very fast clamshell. Moving down a hallway we then engaged a series of target arrays from cover on both sides of the aisle. I was just two points down on the disappearing clamshell target, which made me very happy. Unfortunately I had dropped on shot low into hard cover on that first target shot while leaning through the car, making me -8 for the stage. I also found out later I had been issued a -3 PE for a foot fault. Oh well, that's how the game goes sometimes. 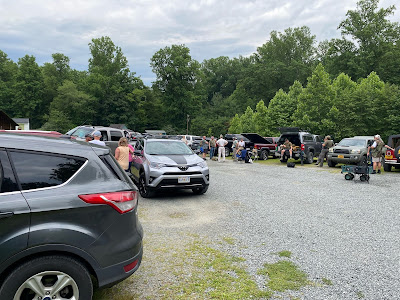 It was a good size crowd that came out for the almost-summer match. The stages were all very interesting, each with it's own unique challenge. Overall, I was very pleased with my shooting, especially given the lack of range or match time recently. The misses on three stages hurt my overall standing of 23 out of 47 shooters. I was first of the just three CCP shooters in attendance. Despite the final scores, it was a great time with fun folks and interesting shooting opportunities. I'm already looking forward to next month's Rivanna match.
After a long cool shower at home, I headed over the the Olde Towne Tobacconist lounge at 1781 Brewing to relax. A delicious, and somewhat gluttonous burger, some refreshing draft beer, and a cigar culminated an exceptional Saturday. 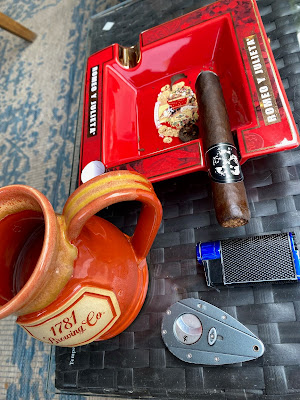 Nothing, as in relaxing and enjoying the down time. Some of that has been necessitated by a long period of dull and wet weather. I skipped shooting last weekend for lack of desire to be running through water. Fortunately the screen porch is fit for other activities.

And that's the story.
There's more cigar content over at Instagram. I tend to be more active there.
Mused by David No comments: