After a week of unseasonably cold temperatures, we were treated to a comparatively warmer days last week. I'd been wanting to try the new Quesada Oktoberfest 10th Anniversary cigar, and do so while I still had some Oktoberfest beers on hand. The "less-cold" temps offered the opportunity to do so.

Quesada Oktoberfest 10th Anniversary 'Das Boot' vitola is a 6 x 52 torpedo featuring an oily Mexican San Andrés wrapper, a Dominican binder as well as Dominican fillers. Quesada's annual Oktoberfest release is said to be designed to be paired with a Märzen-style beer, traditionally served during Oktoberfest celebrations. This year's release marks the 10th such annual offering. 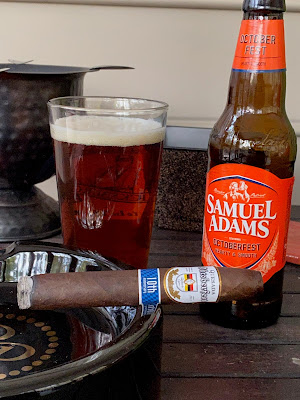 The fridge getting low on Märzen selections, I opted for a domestic, but well done, Sam Adams Oktoberfest. In my opinion, one of the best readily available, though non-local options if you're looking for an Oktoberfest beer.
After admiring the classy looking label, and the shiny maduro wrapper, I fired up the porch heaters, and then the cigar.  (It was "warmer" outside, not warm.) Throughout the smoke, the flavor profile was consistent with woody and earthly notes. An underlying sweetness was present as well. As the stick progressed, I noted an increased roasted espresso component but it stayed well-muted. 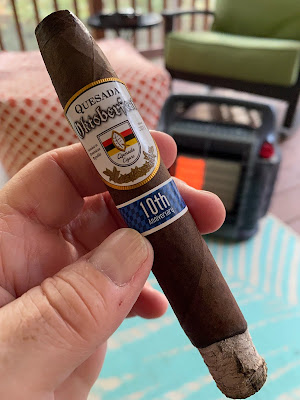 While I smoked a bit of the cigar before really diving into the beer, I found the blend to be quite well done. However, the beer and cigar pairing, was somewhat unremarkable. The sweetness of the beer and the underlying sweetness of the cigar combined to be somewhat dull. Standing alone, I found each to be very flavorful. When I break out another Quesada Oktoberfest, I might try a beer with more roasted notes. I think such a combination might be more enjoyable. In any event, I don't mind trying.
Mused by David