Tatuaje Wolf at the Fire Pit

After spending the morning clearing the yard of leaves, which included all the leaves accumulated in the fire pit, I built the first fire — at home — this season. While I've enjoyed time fireside while on trips, and even at the cigar lounge, our home pit has been sadly idle. Until this weekend.

By mid-afternoon Saturday I was anxiously preparing the kindling and stacking logs nearby. After a short time I had the start of a nice fire, and could pour a beer, light a cigar, and take my seat in a comfortable chair. The cigar chosen was the Tatuaje Monster Mash Wolf, and the beverage was Highland Brewing Black Mocha Stout. 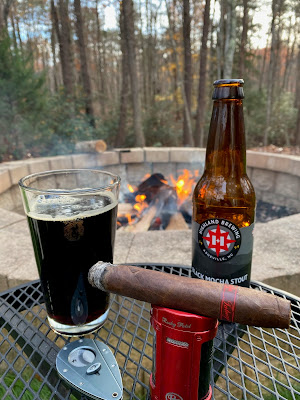 I was expecting this to be a flavorful pairing, and was not disappointed. The Black Mocha Stout pours nearly black, just showing some dark red hints at the edges. A thin, tan head quickly diminishes. I can detect aromas of dark chocolate and coffee. Dark cocoa and roasted malt lingers in the aftertaste.

Tatuaje Monster Mash Wolf is the fourth cigar I've smoked from the 2021 Monster Mash assortment. The 6 x 52 Torpedo has a toothy, oily Ecuadorian Sumatra wrapper leaf, with Nicaraguan binder and filler tobaccos. The initial flavors from the smoke combine a medium woodiness with bitter dark coffee. There's some mild pepper initially. The pepper faded as I smoked, perhaps being "cooled" by the flavorful beer.

As the sun began to set, much too early, the temperature likewise dropped, but the fire was putting off a nice heat. The neighbors' intermittent garden equipment also ceased operation as darkness arrived. The flavor of the Wolf was holding strong, with more intense spicy notes of black pepper making an appearance. In the last third of the stick, the spice coated my palate and lips with that little bit of extra kick. The transition was notable, and wholly enjoyable.

Too soon, the cigar was finished, and the short nub tossed into the waning fire. The several hours spent listening to the crackling of the fire, and unseen creatures rustling in the woods, while enjoying an excellent cigar made for a wholly enjoyable afternoon.