During a recent shopping trip, whilst I had an armful of bottles on the way to the checkout,  I spied a couple bottles of Whistlepig Farmstock Rye on a shelf. Ah well, what's one more bottle?

Farmstock Rye is a newly stocked label in our state-controlled liquor stores. In their best imitation of Socialist countries where a government monopoly controls supply, VA ABC makes it hard for us in the Old Dominion to obtain rarer spirits. I grabbed my one allowed bottle and was thankful to have been in the store at that moment. (Previous posts on this Prohibition-inspired rule of government can be found here and here.)

I had also recently picked up some of the Rocky Patel Disciple. This is a newly released blend that I have been looking forward to trying since it was announced. This past weekend offered the opportunity to pair the two new additions. 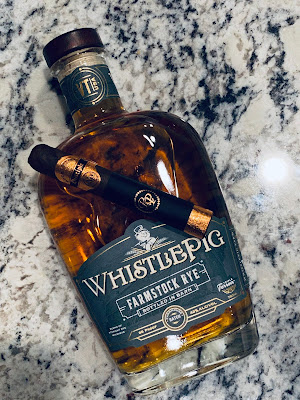 The Disciple Robusto is a 5x50 stick featuring a very dark San Andrés wrapper that's hidden behind two bands which cover nearly the entire cigar. Maybe that serves to add a level of protection to the stick, which was also packaged in cellophane, but it's probably just meant to be an attention grabber in deference to the marketing folks. In any event, the large foot band slid right off. (Sadly, the other band had so much glue it came off in several pieces, fortunately without damaging the cigar.) But I digress.
The dark wrapper encases binder and fillers tobaccos from Nicaragua. The cigar is full bodied and richly flavored. The predominate notes are espresso and cocoa. There are the occasional hints of black pepper and raisons. This is a cigar I truly enjoyed. It produced copious smoke and maintained a sharp burn line, all the way to a tiny, hard to hold nub. This is a cigar which fulfilled my favorite flavor notes to a tee.
But what about the whiskey you say? I am glad you asked. Per the label, the Farmstock Rye features a "triple terroir" blend of which 52% is Whiskeypig's 3-year rye using their own grains, 31% from a 6-year rye, and 17% being a 10-year aged rye. The resulting whiskey a well-balanced, somewhat mild, tasty blend of rye spiciness, leather and oak. There was only a slight burn hitting the tongue, and the finish is clean and short. Overall this is a mellow but flavorful sipper. The cigar and whiskey pairing was a quite decent match.
Oft times I find cigar flavors coming up on the short side of the distilled beverage flavors. In this case, the cigar was definitely the winner of the battle, but not by a knockout. It's definitely a combination I'd repeat. (And I have the supplies to do so.)
Cheers!
Mused by David