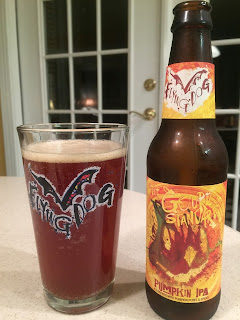 When I pulled the bottle from the review package sent by Flying Dog Brewing, I spied the label "Gourd Standard" and thought, "Oh, a pumpkin beer." Of course, it's always exciting to try new beers, but I'm not a big fan of the pumpkin ales that fill shelves and tap lines this time of the year. Then I read the smaller text at the bottom, "Pumpkin IPA." Well, that's Flying Dog for you — always twisting things up. I was intrigued enough to try it.

Gourd Standard Pumpkin IPA pours a dark amber color and is cloudy in appearance. The aroma brings the expected spices; nutmeg, cinnamon, pumpkin, and a sweet malt base. Those are not IPA descriptors. The taste starts out much as a typical pumpkin ale, but the profile quickly changes and some IPA bitterness comes into play. The IPA-ness is not overwhelming but a pleasing piney bitterness comes to the forefront. There's a hint of mouth-tingling astringency in the mouthfeel as well. The finish is hangs around with earthy and bitter notes, along with a bit of stickiness.

This is a schizophrenic beer. The aroma is full on pumpkin ale; the flavor is predominately IPA. But it's not totally an IPA, as the more you sip, the more the pumpkin ale personality begins to show itself in the flavor. I found my brain wavering, trying to decide what I was drinking. In the end, the IPA won out, and that's a good thing in my book. Gourd Standard is an interesting addition to the fall vegetable beer season, and something that definitely breaks the mold.