Last Tuesday evening Capital Ale House held a “Steal the Glass” night featuring four Heavy Seas Brewing beers. I had previously acquired a Heavy Seas glass, but I was still interested in trying out the new seasonal from the Baltimore brewery, TropiCannon, one of the featured beers. 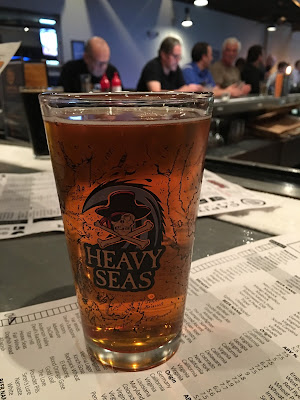 TropiCannon is a variation of Heavy Seas Loose Cannon, one of my longtime favorites from the brewery. The brewery description says that TropiCannon mellows the piney malt aspect of the beer, and ramps up the citrus notes. In addition to altering the hops used, the brewers added dried grapefruit, orange and lemon peel in the brewing process as well as mango, blood orange and even more grapefruit post-fermentation.

The aroma of TropiCannon is something I would describe as “candy fruit.” I was immediately reminded of orange candy, an aroma was somewhat off-putting. On top of the aroma, my first sip impression was somewhat disappointing. The citrus notes had a faux sweetness to my palate.

After drinking about half my glass, I did start to enjoy the flavor of TropiCannon a little more. However, the flavor profile of this “variation” of Loose Cannon admittedly was not what I was expecting. The citrus aspect had an artificialness to it, not unlike what I’ve experienced the few times I’ve tried to drink a kid’s “juice box."

Heavy Seas Cutlass, Siren Noire and Smooth Sail were also on the menu for the evening. Colleen and "Checkered Flag” both enjoyed pints of the Siren Noire Imperial Stout, adding to our collection of “stolen” glassware. I was tempted by Smooth Sail Wheat Pale Ale, which I’ve not tried previously, but then I spied DuClaw El Kabong the menu and opted to try this habanero-flavored beer from another Maryland brewery.

Despite the featured TropiCannon not being a flavor that suited me personally, we had a fun evening of beer, food and conversation. It was a fitting way to spend what was yet another rainy evening.