Last Saturday I made the trip across the Potomac River to shoot the Maryland State IDPA Championship, held at the Sanner's Lake Sportsman's Club. This annual event was upgraded to a Tier 4 match this year, so I was hoping for an especially exciting, and challenging, match.

The match lived up to both expectations, with twelve stages offering some quite unique and interesting shooting opportunities. (Match book here.) The club makes use of electronics to control many of the movers. Rather than just simple swingers, those targets move in programed intervals. Though the entire match was a blast, there were a few stages that especially stood out to me. As I have done in all matches this year, I competed in the CCP (Compact Carry Pistol) division.

The first stage our squad shot, after the opening "warm up" stage was called "Home Defense." Beginning with targets in the open, the course of fire ended with us shooting from a prone position. The only time I am able to shoot prone is in a match. Although the requirement often elicits groans from my fellow competitors, the be truth be told, I generally welcome the opportunity. Perhaps due to that feeling, this turned out to be my highest finishing stage. 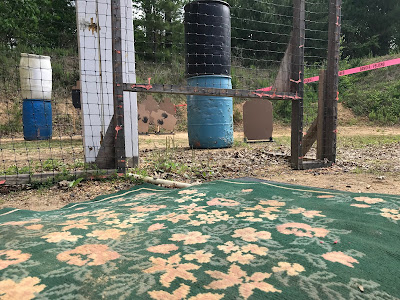 Another stage was entitled "Coming Down the Hallway." With laser activated movers, a variation of the fun course seems to pop up in the club's sanctioned matches often. Triggered by entering a hallway, an extremely fast "up and over" target appears very briefly. A swinging target further down the hallway is set in motion at the same time, and makes just four appearances before being hidden. The key to hitting the first is to start shooting as soon as you enter the hallway, not waiting to actually see the target. Then, you must get to the end of the hallway before the swinger disappears for good. I managed just one hit on each those targets, and ended up 13 points down on the stage. Despite that, this stage tied for my second best stage finish.

Probably the most talked about scenario was "Hi Jacked Again." The entire stage was shot prone, from inside the trunk of a car. We began with our gun laying next to us in the trunk, with the trunk closed and latched. Pulling a handle released the trunk lid and we then engaged the targets, which included an up and down mover activated by a hit on a steel popper. Shooting prone, over the edge of the trunk, meant some neck strain for me, but I still got a kick out of shooting this one. Interestingly, this was the stage finish that tied with the previous stage mentioned. It seems I shoot better when the scenario puts me in extra awkward positions — probably because it forces more concentration and careful aiming. 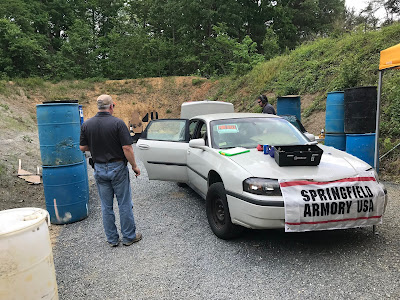 "Out for a stroll" placed us in the woods shooting targets set along a trail through the trees. Not only was it fun, but the shade of the trees was a welcome respite from the afternoon sun. The eight targets were all laid sideways as simulated wolves, so we had to keep in mind just where the -0 zone was in relation to the target. 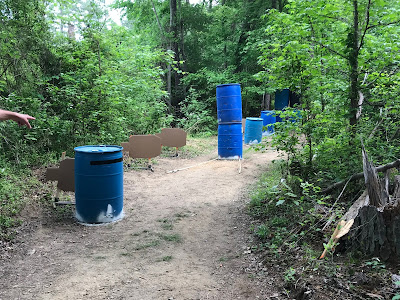 Stage planning was an important aspect of the match. Seven of the twelve stages required downloaded guns, unloaded guns, or guns and/or ammo left on a table or in a box. Adding to that the limited 8 + 1 round count required for the CCP division, meant I did quite a few tactical reloads. One stage started all semi-auto shooters with nine rounds in the gun. That gave me a chuckle thinking about the majority of the shooters who were shooting in the typically 10 + 1 divisions.

We enjoyed a tasty lunch from Southern Bobby-Q. The lunch options included chips, green beans, corn, baked beans, pulled pork, chicken, hot dogs, and Italian sausage. One could have indulged in quite a feast, though I opted to restrain myself, somewhat.

My finish in the match wouldn't win me any awards. I was disappointed in a couple stages, but still thoroughly enjoyed myself. All things considered I was generally pleased. And that, not trophies, is the whole reason I do this. 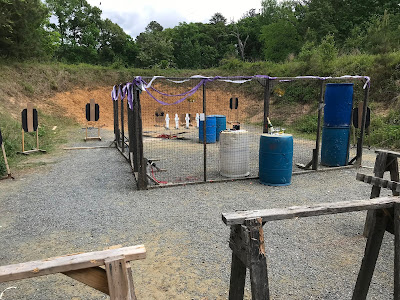 The day was long and exhausting. It was also immensely enjoyable. Shooting started at 9:00AM and finished around 4:00PM. Shooting with many of my regular match companions made it a day of good humor and mutual support. After the match we made our customary run to the local liquor store for supplies. The drive home after the awards ceremony kicked off with a filling meal at a local Mexican restaurant. I should go without saying, I slept soundly that night.

More photos from the day are here.