With the advent of fall, our weekend activities often revolve around college football. Fall also means the store shelves are filled with one of my favorite styles, the malt-rich Oktoberfest lagers. Afternoon tailgating before a game provides the opportunity to combine good beer, good food, and a good smoke.

The tailgate preparations included picking up a six pack of Sierra Nevada Oktoberfest. The brewery collaborated with Germany’s Bitburger Brewery to create the 2019 version of the seasonal release. 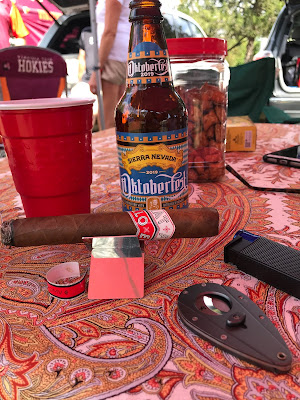 Though not visible through the plastic cup, the beer is an attractive copper-red color with a creamy head. A rich malt aroma greats the nose. The flavor profile has toasty malt, caramel, and a sweet breadiness. There's a mild, but pleasant bitterness in the finish, along with thick mouthfeel. Overall, a very enjoyable drink.

I opted to pair the beer with the limited release Fratello D.M.V. in the District of Columbia vitola. The medium bodied cigar features a rich leather flavor and moderate spiciness. The two hour smoke offered the chance to open another refreshing bottle of the Oktoberfest.

Sadly, our team is not having a good season, and the game following the tailgate fun was most disappointing. However, as fans, we will look forward to the next tailgate, along with more enjoyable beer and cigar pairings.