Spring Weather and an IDPA Match

Last weekend we enjoyed what is often referred to as "false spring" in Virginia. The weather was warm, the humidity low, and the pollen count high. It provided near perfect conditions for shooting. (This week we are back to cold, windy and wet, and with pollen.) A smaller contingent than usual gathered for the monthly IDPA match at Cavalier Rifle and Pistol Club. As usual, five interesting and fun stages awaited us.

As I plan to do for all of 2021, I was shooting the Compact SIG P320. I'm getting used to the 8 round count in the magazines when planning my stage runs, and psychologically, the lower round count forces me to stop including possible makeup shots in my plan.

The first stage we shot was a quick stage with three paper and one steel target. We began with the gun loaded with just three rounds. The first target required two hits to the body and one to the head. After reloading we moved to engage the remaining targets from cover. I shot the stage clean with a -0 run. 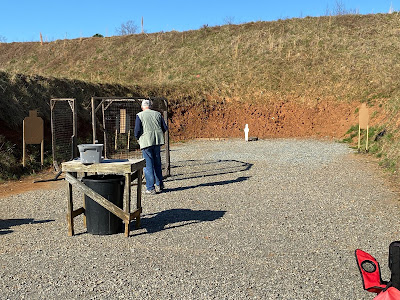 Another out of the ordinary start position was used on the next stage. We began facing up range with our elbows on a table, the unloaded gun was placed on a barrel behind us, and all magazines were placed on another barrel further down range. Seven paper targets were engaged from four points of cover among the walls. My "no makeups" stage plan bit me a bit here as I had a -3 hit one target that I did not make up, and finished -4 on the run. 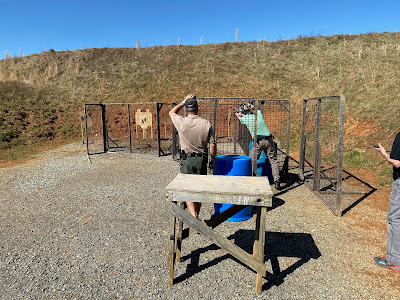 Again, our next stage again offered more variation from normal. We saw a field of eight targets arranged across the bay, some hidden by barrels, high and low, with half being head only targets. The stage was shot in two strings. The first string mandated a single shot on each target, while the second string was shot support hand only, with shots to the four full targets. The starting position was the loaded gun in hand, with the barrel tip resting on the top of a cone placed mid-stage. 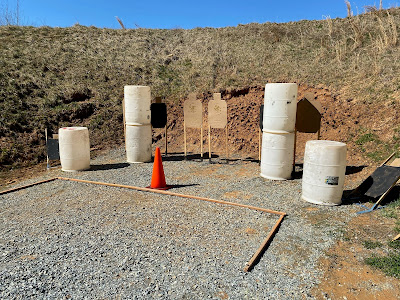 The target placement was such that some movement was required to see all targets. Since the start was in the center we had to traverse most of the shooting area. On the first string, stepping to the left allowed one to see six targets, before moving to the right for the last two. Given the close proximity of the targets, most of the shooting could be done on the move. For the second, WHO string, I moved left to get the far left target behind the barrel, before moving across the stage and engaging the required targets. I was -1 on the stage, for a head shot just outside the center circle.

Our next stage again required the gun to be downloaded to six rounds, and placed on a table with the rest of our magazines. We started facing the right berm, a few steps from the table. After retrieving the gun, three targets were engaged. Grabbing a magazine from the table, we needed to reload while at the same time retreating up range. At the final point of cover, there were two more targets to be engaged. I shot this one -2. 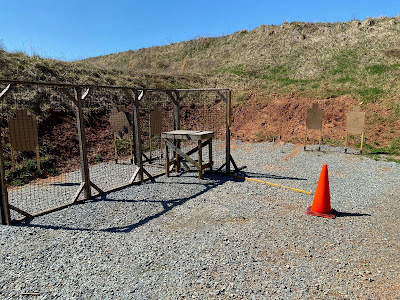 The last stage was the only one with a full gun "normal" start, but it still added a unique twist. Four of the targets in the course were partially blocked by non-threats. On those targets, the head area of the threat targets were painted as hard cover. Even though head shots would typically be the safest as they were furthest from the penalty targets, they were unavailable for scoring. 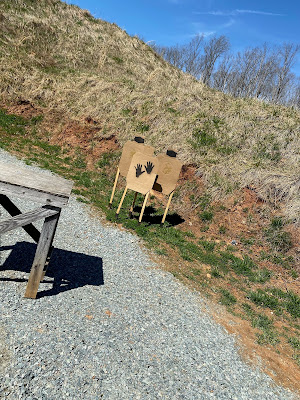 Despite that extra challenge, I shot the stage -0, and it was actually my best overall finish of the morning. It was a fun stage, with lots of movement. I was relieved to finish the day on a high note. 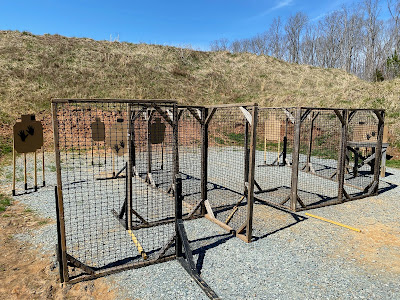 It was a beautiful morning for shooting. Despite a cool start to the day, it warmed up quickly. I was a little overdressed but still comfortable. I even managed to acquire my first sunburn, though mild, of the year. I was generally pleased with my shooting. Even with the -3 hit, I was -7 total for the match. Despite that, I finished mid-pack, 17th of 31 Overall. I think I still move fairly efficiently, but have slowed over the years in finding the sights and getting the shots off. Perhaps a little more dry fire, or actual practice might help in that area.

After a pleasant drive on country roads home, there was plenty of time to enjoy the mild weather with a cocktail and cigar on the screen porch. Couldn't ask for much more on that almost-spring Saturday. 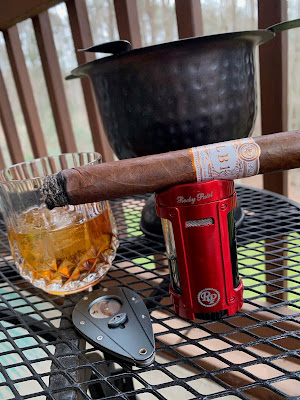 For those curious, that's an Old Fashioned made with Maker's Mark Cask Strength paired with a Rocky Patel LB1 in toro.