A Beer and Tourism Partnership 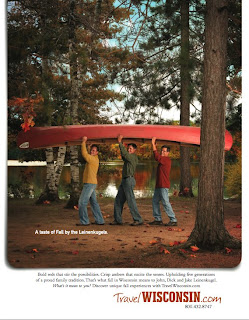 Celebrate “a taste of fall.”

The Leinenkugel family, which has been brewing beer for five generations, is celebrated as a “Wisconsin Original” in a new ad from the Wisconsin Department of Tourism.

The ad, part of a campaign highlighting fall activities in Wisconsin, features the Leinenkugel family. A voice over from Dick Leinenkugel talks about “bold reds that stir the possibilities” and “crisp ambers that excite the senses” – references to both Leinie’s beers and fall foliage.

The family’s appearance in the ad highlights its tight connection to Wisconsin’s heritage. The Jacob Leinenkugel Brewing Company was launched in Chippewa Falls in 1867.

A print ad that’s part of the campaign can be seen here.

While the ad campaign does not directly promote beer tourism, it does recognize the state's brewing heritage. I've written previously regarding beer tourism in Virginia. While the Virginia Tourism Council did recently update its web page devoted to Virginia breweries, the information presented is limited in scope. But it's a start. Perhaps we'll see Virginia follow the example of Wisconsin and use it's own brewing heritage, and the ongoing expansion of the craft here, to promote tourism in Virginia too.
Mused by David