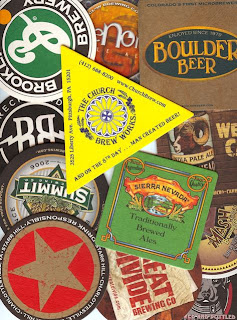 It's interesting how how one can find themselves with a collection of something without actually giving thought to collecting. That's what has happened with me and beer coasters. Beer coasters, or mats, are one of the pieces of breweriana that seem to accumulate around here. I typically pick them up when visiting brewpubs or beer fests. I was recently looking at the stacks I have and reminiscing about their sources. Some are from friends who brought them back from trips, sometimes accompanied by beer! Others where gathered on visits to breweries. I've picked quite a few up from brewers' booths at beer fests.

These bits of cardboard provide advertising for the breweries. Fortuitously, they also serve a number of useful purposes for drinkers. Besides keeping the bar or table dry (when our beer is improperly served in frosty mugs), they are quite useful for marking your seat at the bar if you have to get up. Need to attend to "business" after drinking a few beers? Just place the coaster on top of your glass and you'll (generally) prevent an over-zealous server from taking your beer away while you are gone. I don't know how prevalent these coasters are in other parts of the world. Boak, of Boak & Baily, comments that the coasters are popular in Germany, but are not used in England.

Beer coasters have some advantages for collectors over other sorts of breweriana. As opposed to a collection of bottles or cans, they take up very little space. You can store the coasters in photo albums or on a wall. Of course the best thing to do is to use them as they were intended. Put them under a glass of good beer!