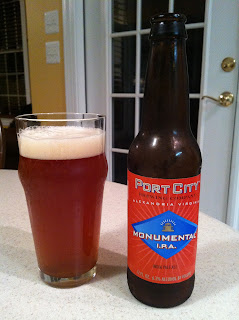 This is the third in a series looking at the four beers currently available from Port City Brewing in Alexandria, Virginia.

Port City Monumental IPA is hazy copper in color. A hard pour creates a moderate, but persistent off-white head. The smell is mild, with caramel malt notes. The taste is rich in malt flavor and is slightly sweet. Some enjoyable citrus zest bitterness comes through at the end. The finish is clean with a short-lived aftertaste.

The IPA was the beer I was most looking forward to reviewing out of the Port City beers. It's a fine beer, but in my opinion, the least exciting of the bunch so far. I drank it on several occasions just to be sure of my thoughts. I enjoyed each bottle I opened and I wouldn't advise anyone against buying Monumental IPA, it's a fine, if average, example of the style. Of course, that statement should be tempered by my personal preferences for a little more "extreme" in my IPAs. I might pick it up again, but the Pale Ale and the Optimal Wit would be my first choices from the brewery.

The final beer from Port City is their Porter. I'll probably save that review for cooler weather.