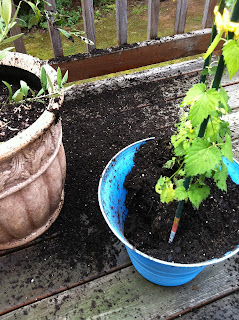 While ordering plants this Spring to fill pots and planters on our deck, Colleen thought it would be nice to add a hop plant. We don't home brew, and don't expect to harvest the cones, but the vine would be an interesting addition to the foliage outside.

The plant was potted up, and a small trellis added. The vine adapted quickly and has been putting out new growth. Today, when we came home from Mass, the disorder pictured here greeted us. This is actually the second time in a few weeks that some creature, we're assuming a squirrel, has dug into this pot. Not a single other flower pot on the deck is touched. The same potting soil is used in all the pots. Neither the plant nor the roots appear to be eaten. There's certainly something about this plant that sends the critter into a digging frenzy.