A Different Smoke at The Pub 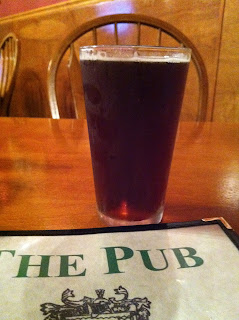 Unlike in years past, we frequently enjoy a smoke-free evening at The Pub. My son and I had a recent "guy's dinner out" and I found another kind of smoke at The Pub. And this was of the sort that I very much enjoyed. Four house beers from Battlefield Brewing were available during this visit. One of the listings was Khe Sanh Märzen, described as brewed with "6 different malts including one that is dried over an open flame." Tempting enough to try for sure!

Khe Sanh Märzen pours a dark reddish-brown color with a very thin beige head. The aroma is faint with hints of caramel. I did not detect any smoke aroma initially, but as the beer warmed the smoky notes became more prevalent in the aroma. The immediate flavor hit made me think of a hoppy brown ale, though that is very quickly augmented with a pleasing smoke flavor. I found the smokey aspect to be moderate and not overpowering or distracting. The finish leaves behind a long-lingering bitterness backed by the smoked malt flavor.

I paired my beer with one of The Pub's burgers (what else?) and some hot wings. The smoky Märzen had an interesting cooling effect on the spiciness of the wings.

The thing about "smoked beers" is that you either love them or hate them. Just as I was telling my son that some smoke-flavored beers are almost overpowering in their bacon-ness, but this one was nicely balanced, our waitress come by and asked how I liked my "bacon beer." She told me the flavor was too much for her — she loved bacon, but not in her beer. After I gave her my impression, she told she had taken a growler of the Märzen home and slowed cooked some ribs in it, and they were excellent. I bet they were!

On another note, I recently remarked how much of the beer-drinking populace is enamored of weak, "factory beers." I was reminded of that again at The Pub. While I was enjoying my meal at this local brewpub, with fresh beer brewed onsite, I overheard the order from a nearby table, "Bud Lite please." To each his own I suppose.