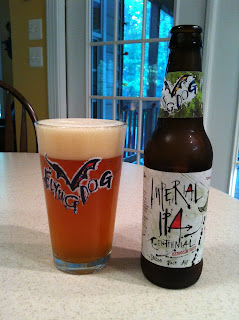 The beer pours a cloudy marmalade color with a thick off-white head. The head drops to leave a thin layer, and lots of lacing behind. I picked up the floral and honey aromas right away as I poured. The flavor is citrus fruit — I'm thinking grapefruit and orange. The citrus flavors have some sweetness, much like the "meat" of the fruit, rather than bitter rind. This Double IPA comes with a 10% ABV that doesn't hide. Centennial IPA is a somewhat boozy beer, but it does still go down quite smoothly. The mouthfeel is syrupy and leaves a sticky finish behind.

I enjoyed this version of Flying Dog's Single Hop IPA while relaxing after a long work week. It was just the sort of beer for slowly sipping, at home, with no place to go.

I received this bottle of beer in an unsolicited package from Flying Dog Brewery. Flying Dog is very active in reaching out to the community and frequently sends samples out to bloggers. And while I don't write about every beer they send, I do appreciate their generosity. (Other breweries take note.)

FTC Notice: I drank and reviewed this beer of my own free will. No compensation was received for the review.