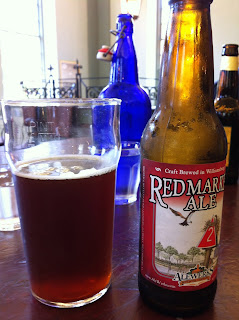 Six years ago when I started writing these Musings, I had in the back of my mind that I'd get around to trying all the beers from all the Virginia breweries. Well, I've long forgotten that goal — I can hardly keep up with the ever growing list of breweries, much less their beers. Despite that, I'm often reminded that I've missed even the "easy" ones.

I was looking through photos from our recent vacation and I came across this beer picture I had taken at a lunch stop and was reminded of another tasty Virginia beer I enjoyed recently, one that I don't recall trying previously. We had detoured to the Dog Street Pub in Williamsburg on our drive back from the Outer Banks. I was looking forward to a light lunch, and hopefully a good beer. The pub has a fairly extensive draft beer menu, but I was drawn to a bottle of the locally brewed Red Marker Ale from AleWerks Brewing Company, right there in Williamsburg. This American Red Ale checks in at just 5% ABV, which made it ideal for the quick lunch stop.

A hard pour into a classic nonic pint glass created minimal head but released the rich caramel and bready malt aromas. The beer is a deep red-amber color. The initial flavor is slightly sweet and bread-like. Some mild citrus bitterness comes through at the end. The overall flavor profile is balanced and mild.

Admittedly, I haven't had too many AleWerks beers, probably due to the fact that they are readily available locally, leaving them to be overlooked. However, I've always enjoyed the ones I've tried. Coincidently, the last AleWerks beer I drank was during my last visit to the colonial city.

So many breweries, so little time.