A few months ago I was in a local grocery store and I saw a guy wearing a t-shirt from the Full Moon Brewery in Manteo, NC. I'd never heard of it, and since we were planning a trip to the Outer Banks, I made a note to find out more. The small restaurant and brewery is located in old town Manteo. We've driven down the main drag through the island on the way to the aquarium, but have never veered off into the village. It's a charming town that we'll have to check out further on a future trip. But this trip was solely for the brewpub.

The lunch rush was in full swing when we arrived. Both the restaurant area and separate pub are quite small, and there is also an outdoor seating area. Despite the crowd, we got a table pretty quickly and service was friendly and prompt throughout our stay. 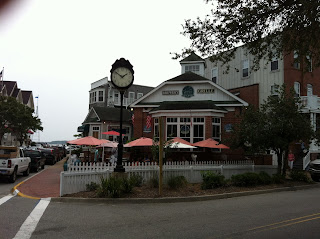 Of course, the first order of business was to review the beer menu. Nine house beers were listed, along with one guest tap from Weeping Radish Brewery. Full Moon focuses on British and Irish style beers. I was impressed that, despite their outward size, they had that many house taps. This was going to be a tough decision so I opted to start out with a flight of four beers.

The first beer I tried was the Baltimore Blonde, a British-style Pale Ale. The flavor and aroma was mild caramel and honey, which carried over into the flavor. A barely noticeable citrus bitterness come into play at the end. I suspect this is a popular draft for less adventurous drinkers. Next up was the Devils Own IPA. This tasty British-style IPA had a golden color with a thin white head. The taste is a nice balance of citrus and bitter. It's a light flavor with a clean finish.

Up third, I tasted the Paddy Wagon Red. Deep red in color with a malty aroma, the flavor is toasted caramel and barley. The mouthfeel is somewhat creamy. This was a well-done Irish Red Ale that I enjoyed quite a bit. At just 4% ABV it makes a good session beer. Finally, I moved on to the Vitamin O, an Extra Special Bitter. ESB's are one of my favorite styles, so I was looking forward to this one. The reddish-brown beer had a very thin white head, and a nutty, caramel aroma. The flavor was slightly sweet, and nutty with some mild bitterness. Caramel and toffee lingered in the finish. The beer was nicely balanced. I ended up ordering a pint of Vitamin O to enjoy with my food.

Colleen and Checkered Flag decided to go big and they both ordered glasses of Stone of Destiny, the brewery's 9% ABV Wee Heavy. The beer had an earthy, malty aroma. The flavor brought forth molasses, dark coffee, some dark fruit and a touch of smoke. Those two glasses of beer received rave reviews from their drinkers. 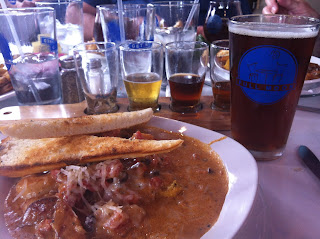 Speaking of food, we were quite impressed with what we ate, and saw, at Full Moon. Colleen and I both ordered Shrimp and Grits. The sautéed Shrimp are accompanied by andouille sausage, peppers, tomatoes, onions, black beans and Creole spices, and served in a creamy sauce over grilled polenta. The dish was very flavorful and had enough kick to live up to the Creole label. It was also quite filling. The rest of our party ordered bacon cheeseburgers made with Angus beef, and real chunks of crispy bacon. Their sandwiches were huge and quickly devoured. The other food dishes we saw looked good, and like our selections, appeared to come as generous portions. At one point we all turned longingly to watch attractive platters of Fish and Chips being carried to other tables. Full Moon seems to do "pub food" quite well.

In proper Irish (or British if you prefer) pub style, Full Moon's beer repertoire also included a Stout, an Imperial Stout, and a Porter, but I was unable to get to them this visit. I regret that we didn't visit earlier in our trip so we'd have time for a return visit. I'm thinking those Fish and Chips would go quite well with a pint of Manteo Porter. Next time, for sure.

I am glad I spied that Full Moon T-shirt as it led us to a great new beer destination. We bought a couple shirts ourselves, maybe we'll lead some other fans to good food and beer in Manteo. The next time we visit the OBX, we'll definitely be back.