I'd been watching the weekend weather forecast all week in preparation for the Walnut Ridge Practical Shooters monthly match. At the start of the week, the Saturday prediction for Summit Point, West Virginia showed a 60% chance of rain, and morning temperatures of around 27°. So when I arrived at the range in the morning, the sun, and 43° temperature, was a pleasant and most welcome surprise. Some gusting winds added to the chill, but still, for the end of November I couldn't complain. The predicted cold front arrived later in the day, and I heard the afternoon squads shot in much colder conditions.

For the second week in a row, my match began with a Texas Star. The opening stage for our squad also included two groups of Pepper Poppers on either side of the stage. I've heard that this spinning prop will be showing up regularly at Walnut Ridge matches, and I'm actually glad of that, despite my troubles clearing it this time. The star is used frequently at major matches, but it's a target that I don't get to practice on. 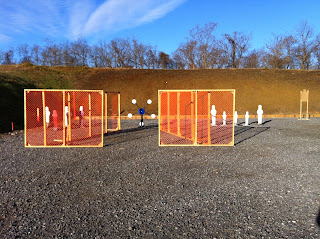 The next stage, sharing the same bay, featured both a drop turner and a swinger, triggered simultaneously, in addition to three falling poppers and two paper targets, all shot from a single position. The drop turner was not visible at rest, but did not qualify as a disappearing target, as the stage designer had provided a shooting location down range, to which a shooter run and shoot only this target, if he missed it from the main shooting box. It was a fun and fast stage.

The next bay we moved to had two typical "run and gun" stages, with the targets carefully placed to make having a plan, and sticking to it, a requirement. On both stages, many of the targets were available through narrow openings, and often from multiple places. I saw lots of variations of shooting plans. I walked the stages many times and got very comfortable with my plan. On the first stage in this bay, that plan went off without a hitch. On the next, I left a popper standing and didn't notice until the RO informed me. Brain fart, pure and simple. 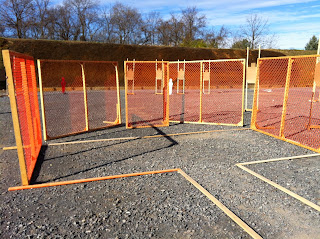 The fifth stage I shot was the classifier, CM08-06 "Six." This being a fast and close course of fire, I fell into the "go fast or go home" trap and threw a miss on paper and some extra shots at the steel. As noted, Walnut Ridge sets up two stages in each of three bays. The course designers took advantage of this with the next, and final stage of the day. The course of fire started out in that same shooting box from the classifier, engaging the same four targets. Then the shooter had to move over to another larger shooting area and engage paper and steel targets while moving across the bay. The second "half" of this stage could have stood alone, but this combo set up added more gunnin' and more runnin' and I think folks enjoyed it. I know I did.

Although I picked up two misses, along with that forgotten steel, I was generally happy with my shooting. The misses were on close targets which is a symptom of impatience, and I have plans for some practice drills to remedy that. Overall I felt good about my stage plans and generally executed them as I wanted. The stages were all fun and offered a variety of challenges. This was last match of the year for Walnut Ridge, and perhaps the end of the season for me as well. Now it's time to spend a couple months practicing and preparing for next year.