We spent last week in Clearwater Beach, Florida enjoying some much needed warm weather and sunshine. While there, we took a day to visit a few local breweries. The St. Pete/Clearwater Craft Beer Trail ties in 15 breweries between Tarpon Springs and Gulfport, and though we only took in three, it made for a pleasant afternoon enjoying some good beer. 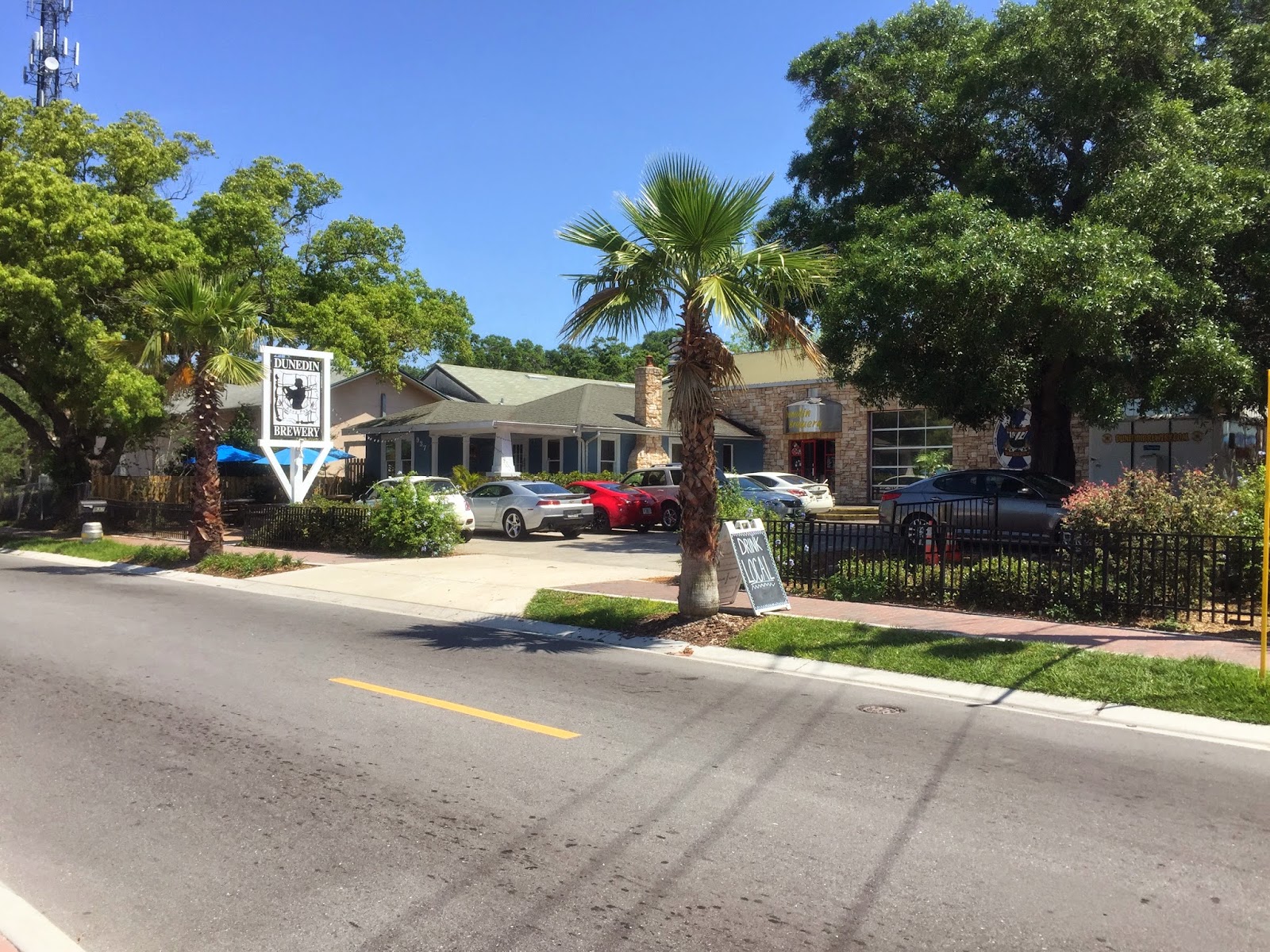 After a hearty breakfast at a great diner we happened upon, our first stop was Dunedin Brewery in the town of Dunedin. Established in 1996, this is Florida's oldest craft brewery. We ordered two flights of samplers and tried out eight of the brewery's beers. 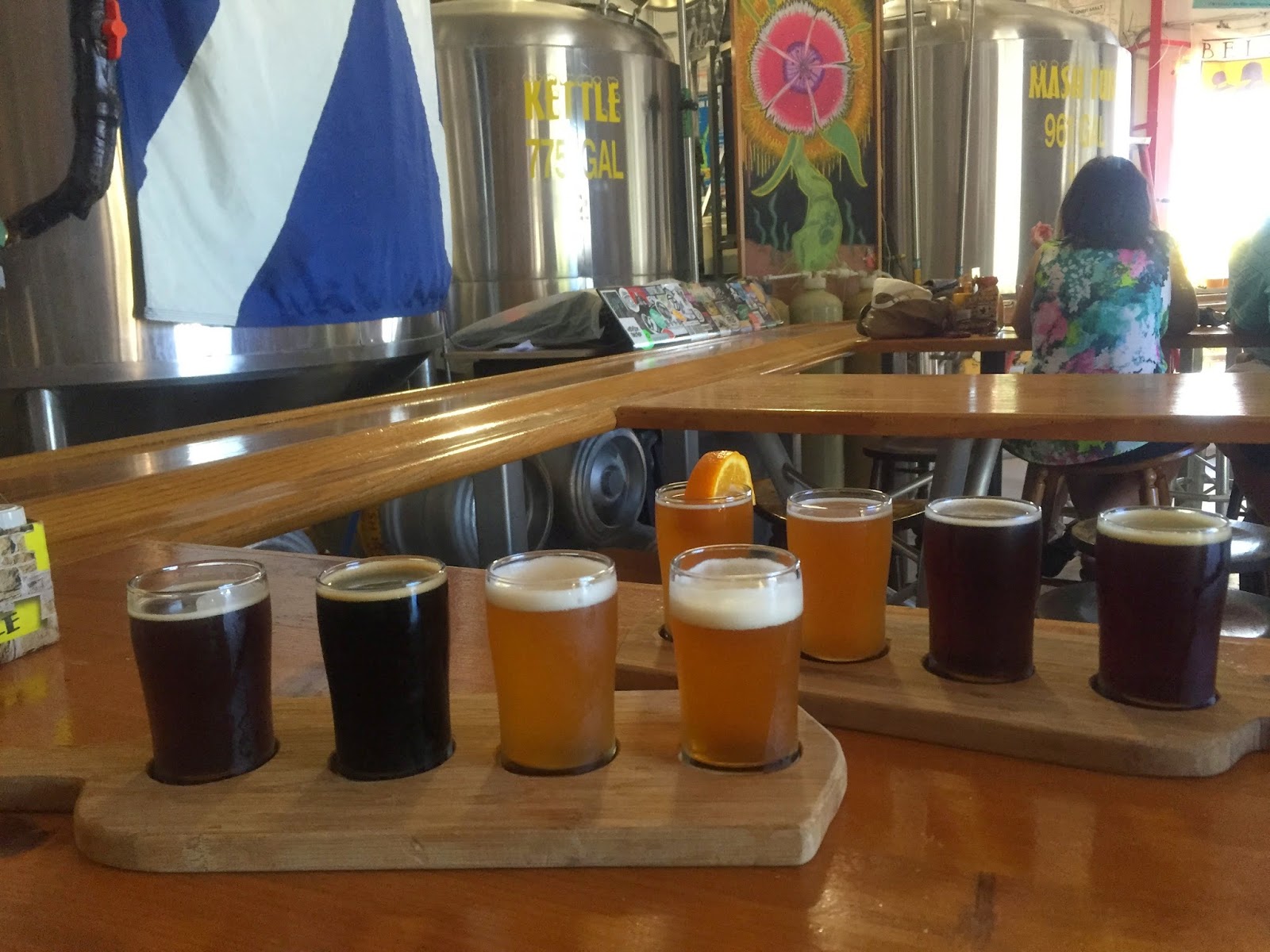 All of the beers were well done. We found the Pale Ale, the IPA, Wheat and Peach ales to all be tasty, though not memorable. The brewery seems to shine when it comes to the "darker" beers though. The Bier de Cafe Brown Ale had a rich mocha flavor and a creamy mouthfeel. Leonard Croon's Stout was also exceptional with a roasted coffee aroma and flavor. The Batch 1000 Imperial Brown was our hands down favorite. Even at 11.5% ABV, it was still smooth with pleasing bourbon and espresso flavors.

Our next stop was 7venth Sun Brewery, just a few blocks over from Dunedin Brewery. The tap room had seven house beers on tap, plus three guest taps. We opted to try four of the 7venth Sun beers. After I gave the server our list of beers, she started pouring into full size glasses, and I reminded her we just wanted the 4 ounce samples, please. She let me know that due to limited space they use the same glass for the samples as well as full pours. Indeed, I saw later that the 16 ounce glasses had fill lines for 4 and 12 ounces pours as well. Colleen and I both remarked that it was nice to be drinking from full size glassware even though we ordered taster pours. Nice touch there, 7venth Sun. 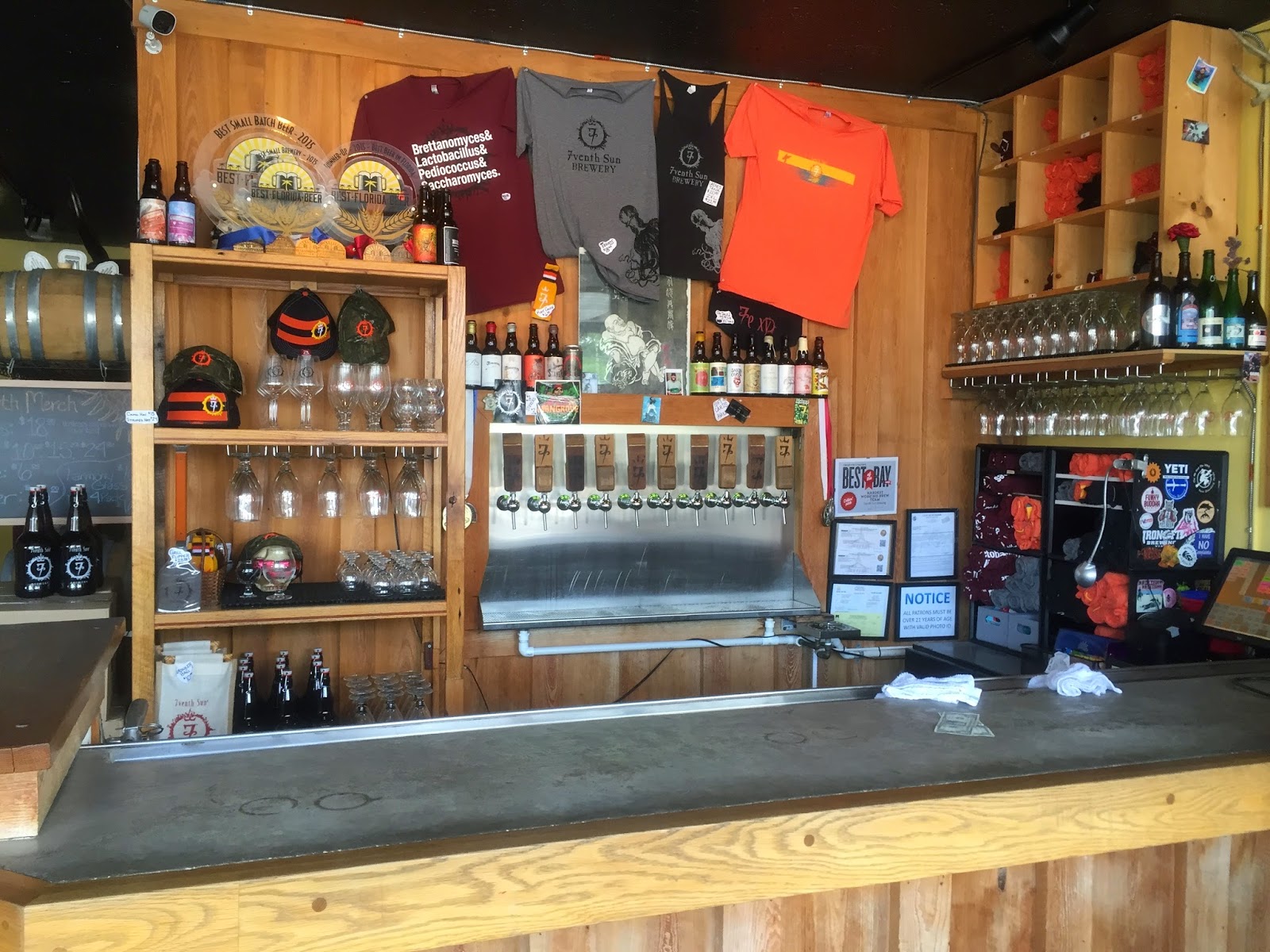 We carried our beer outside and enjoyed them in the shade of the porch. The beers we tasted were Dancin' In The Street, Graffiti Orange Creamsicle Wheat, Time Bomb Session IPA, and Hopeless Bromantic. 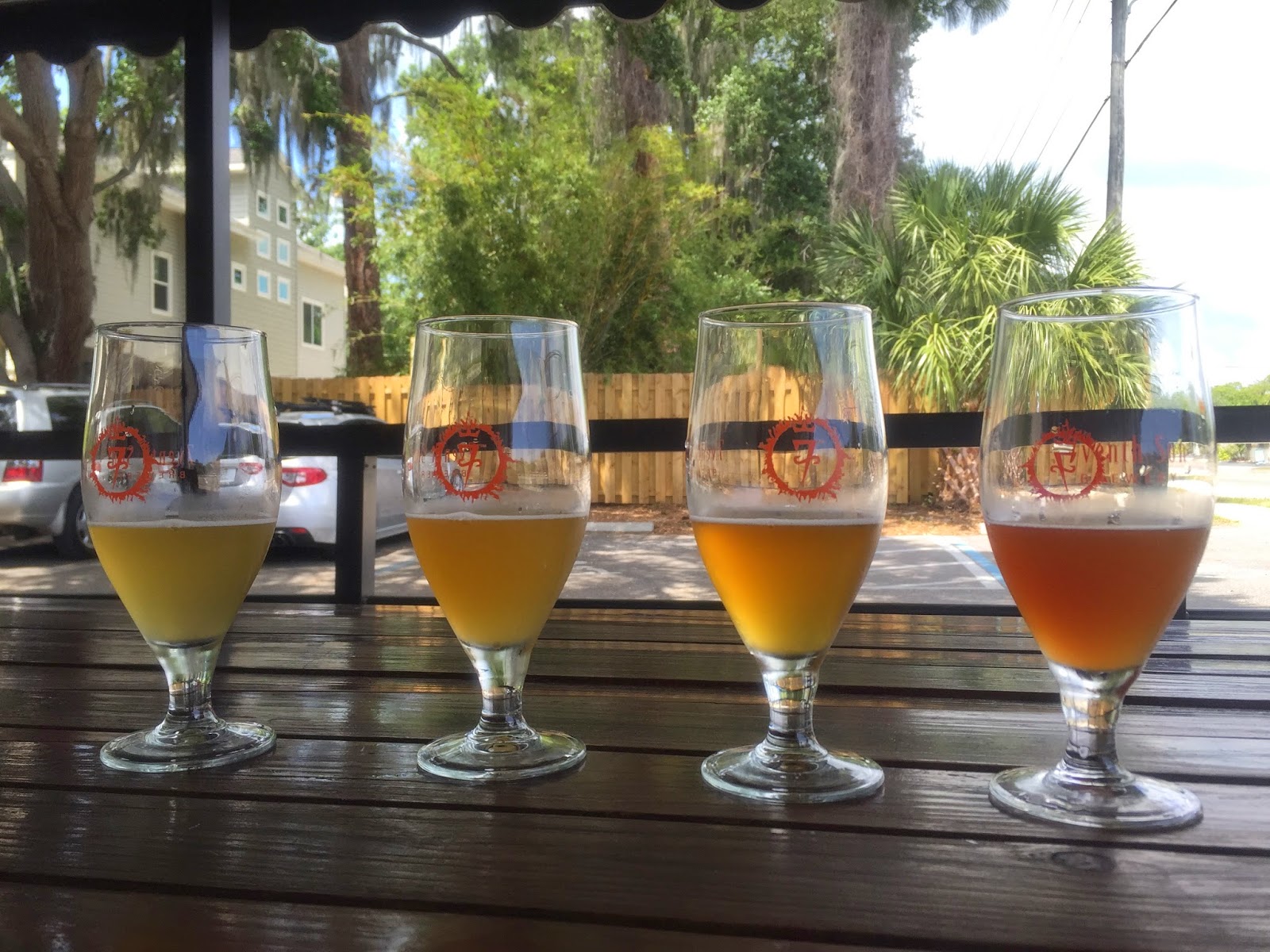 Dancin' In The Street was a refreshingly tart ale, described as a "Bret Berliner with Watermelon," though I didn't pick up the watermelon flavor. Creamsicle Wheat did indeed bring memories of the Creamsicle ice cream treats of my childhood, along with mild sweetness and wheat. Time Bomb was a bitter IPA made with Cirta and Nelson hops and checking in at just 4.5% ABV. Finally, Hopeless Bromantic was another sour ale with some "funk," described as a "Brett Farmhouse with Italian Plum." All of these beers were extremely tasty and I could have stayed longer to enjoy larger servings, but there was one more stop we wanted to make for beer and food.

Finally, we headed over to the Lagerhaus Brewery and Grill in Palm Harbor. We selected this stop not only for the German beers, but because we read they also made their bratwurst in-house. We weren't disappointed in the beer or the food. We set ourselves up with a bacon-wrapped pretzel, homemade Spätzle, and assorted Bratwurst. The Bratwurst is made without filler and cooked in the brewery's beer. We had four different varieties on our platter; chicken, curry, chipotle, and "regular." I got the impression the flavors offerings vary but all of these were delicious. I personally enjoyed the somewhat unusual chipotle bratwurst the most. 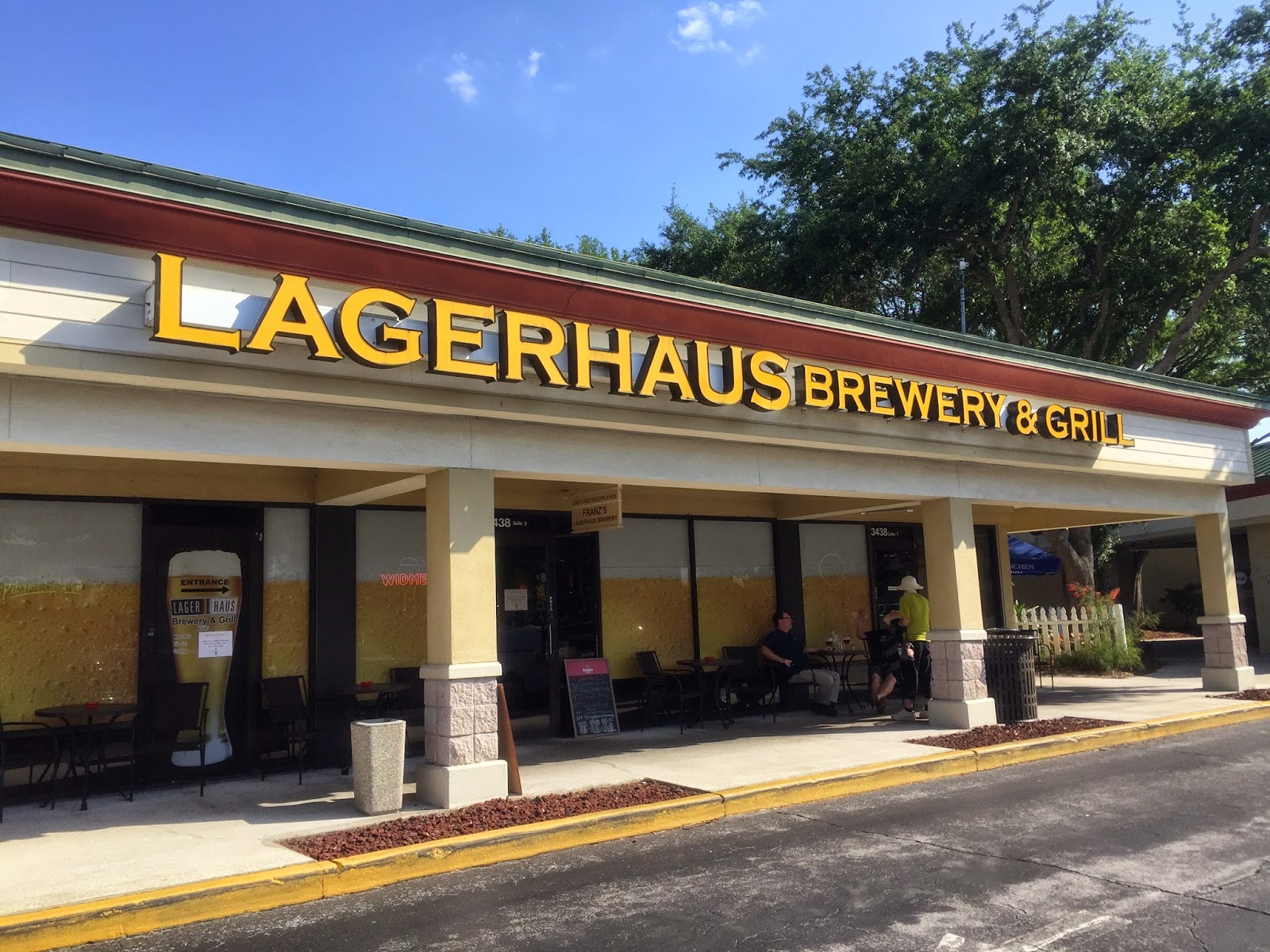 Along with our food we ordered two traditional German beers; Fischer Hefeweizen and Royal Bohemian Pilsner. After we made our selections the bartender informed me it was "two for one" happy hour. I was a bit shocked when I realized we were getting two glasses of each! Well, we did have a lot of food to consume. The Pilsner had a nice, dry crispness to it, as I would expect from an authentic Pilsner. Likewise, the Hefeweizen adhered to the style, with grainy wheat and a mild citrus flavor in a bubbly body. We had a great time chatting with the friendly bartender as well as brewer Franz, while enjoying the good beer and food. 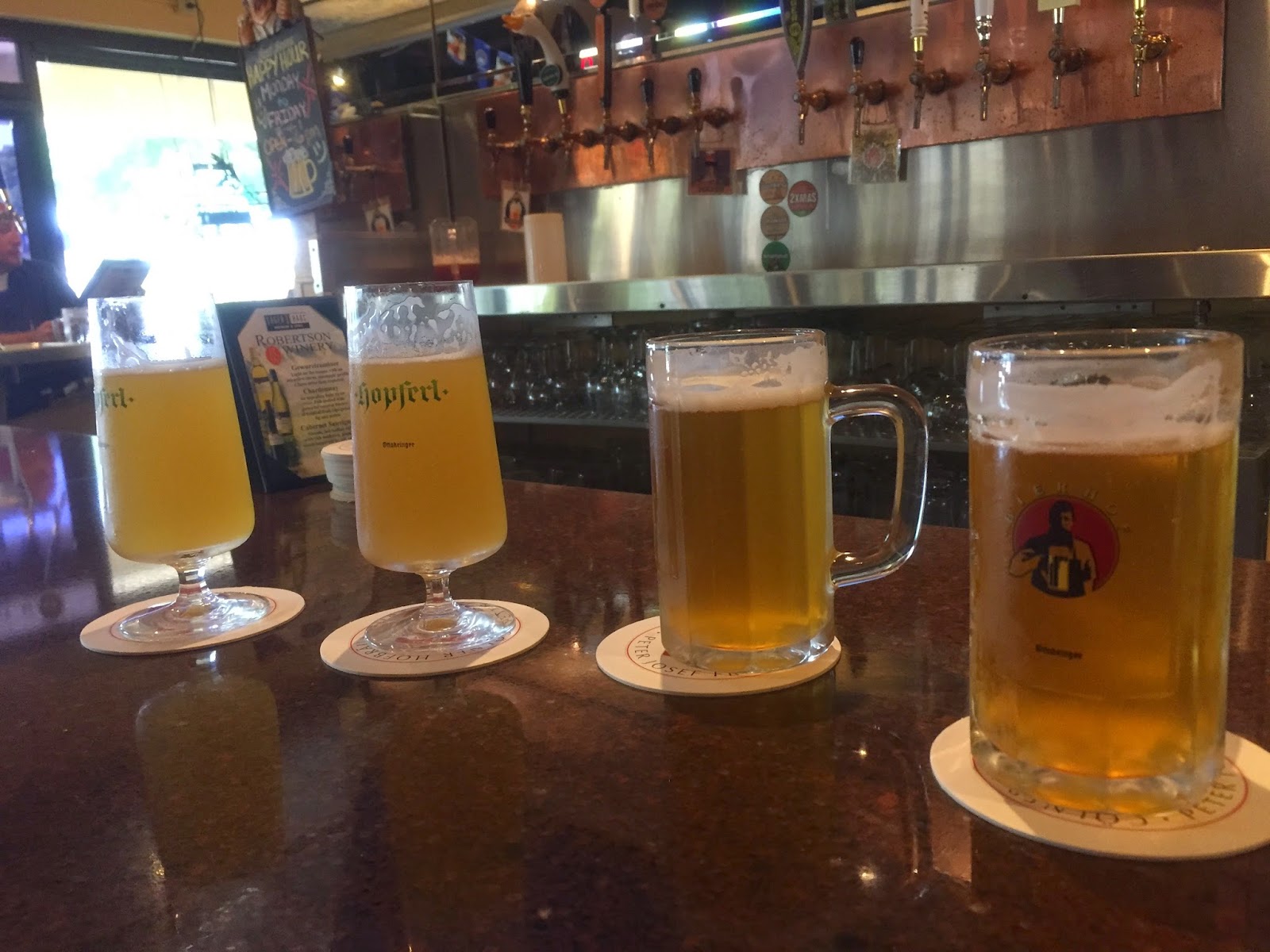 I found it somewhat surprising that the many restaurants and pubs we stopped in to for our meals during our stay did not feature local beers. Most beer menus focused on "factory beers." The one exception was Cigar City Brewing Jai Alai. This IPA was offered at several places. While I would have liked to visit more local breweries, we more so wanted to spend time enjoying the sunshine and beach. Conveniently, our hotel had bar service on the beach, so we didn't have to look far for more frosty beverages.