While enjoying my coffee Thanksgiving morning, relaxing after Mass and a big breakfast, I started thinking about some range time. I've only gotten out to shoot once in about the last six weeks. Looking through old Thanksgiving-related Musings posts, I noted that I had been to the range previously on Thanksgiving day, and had the range to myself. I figured why not try again?

Sure enough, the park was empty except for a lone fisherman. I took my place near one of the wider berms and set up a couple of IDPA targets. The ground was covered in leaves and pine needles, so I also set out a small tarp to catch brass (at least some of it anyway.) 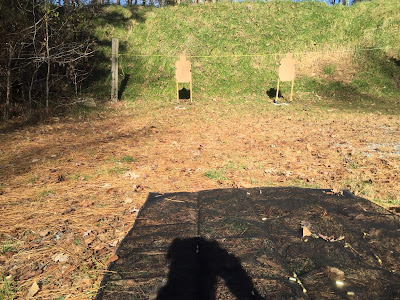 I eventually spread the targets apart further and spent some time working on transitions between the two. Shooting on the move and head-only shots got some practice too. After the requisite visit from the RO, and no admonishments, I snuck in some close in, and fast, multiple shot, point shooting.

It was a beautiful afternoon, and I greatly enjoyed the time shooting, being thankful for the freedom to do so. I was surprised to have the range to myself on a 60° November day, but grateful for that as well. It was a wonderful addition to the holiday celebration.