On Saturday, over 100 dedicated, and perhaps slightly crazy, shooters braved rain and extremely muddy conditions to shoot the Chesapeake Cup BUG and CCP Tier 2 Match at Sanner's Lake Range in Lexington Park, Maryland. I'd been looking forward to the match and had been wearing out my phone's touch screen watching the weather forecast in the weeks before the match. At least the temperatures in the upper 40's to 50's made the wetness bearable.

Adding to the challenging weather conditions, the ground cover in many of the bays does not react well to wet conditions. Much of the ground we had to traverse was left extremely soft and muddy. I likened it to walking in freshly poured concrete. On the bright side, it was not excessively slippery, but threatened to suck off shoes, and left a cratered, puddled service on which to navigate many of the courses of fire.

I started the match at stage 1, seated at a "card game." The course required grabbing my "winnings" and then pushing a button to activate a mover. After engaging several targets while seated, we moved to engage more targets from cover. Unfortunately the wet weather interfered with the electronics, so when I pushed the activator button, nothing happened. I got to spend some time, sitting in the chair, watching match officials replace switches and troubleshoot the wiring. 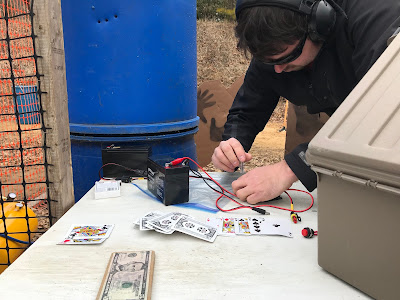 Eventually, I was unloaded and our squad jumped over to stage 2. This was a quick course with six very up close and personal targets. After shooting that, I returned to my previous seat to shoot the now repaired stage. It was a little bit of a mental challenge to jump around the stages, but I got it done. Three members of our squad returned to complete the first stage before another squad showed up. Unfortunately the remainder of our squad had to return at the end of the day to complete stage 1.

After the close targets of stage 2, the third stage required us to shoot at a much longer distance. Sixteen targets, placed out around 25 yards, required one hit on each. I've been getting in some longer distance practice of late, so was looking forward to this challenge. Unfortunately, while I did have three -0 targets, I also had a number of -1 and -3 hits, for a total of 18 down. However, there were no misses.

The next stage was one of my favorites of the match. The scenario was a lab being attacked by terrorists. At the start, we grabbed a test tube which we had to carry in our hand for the entire stage. We also hit a large button on the wall that activate one close moving target. That mover jerked back and forth at intervals, the target literally jumped out of the way of your shot if your timing was just right (or wrong.) After that there were a couple steel poppers, place in front of a non-threat. Two more points of cover offered shots at partial targets fronted by non-threats. 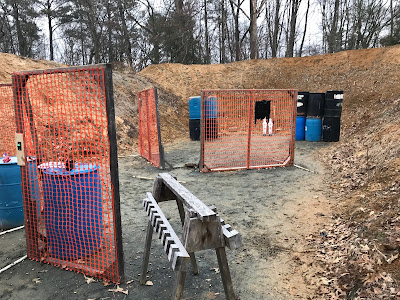 To my chagrin, the rain started in earnest at this time, and the targets were bagged just in time for my run. Despite that, I believe I shot the course just -2. Unfortunately, the stage was thrown out from the match due to scores being lost for some shooters. Another failure of electronics during the day.

Stage 5 was a repeat of a fun stage we saw at a recent monthly match, with a couple swingers activated by steel at the opposite side from the targets. Alas, this stage was also thrown out due to scoring losses by the electronic scoring devices.

In what was the most interesting "pick up gun" stage I've encountered, the match provided a Mossberg Shockwave to be used at the start of the course. We got a few minutes to dry fire the pistol grip shotgun before shooting it. The stage started with the gun aimed down range, and requiring three shots on three steel targets. Finishing with the shotgun there were targets to be engaged, with the pistol, from both sides of a wall, including a swinger activated by stepping a rubber pad.

I found no comfortable way to confidently aim the short, wet shotgun, and wanted it nowhere near my face. Instead I held it low, racked off three quick shots and then engaged the steel with my pistol. It was a fun stage, and offered a chance to shoot something different. The Shockwave is an novelty gun and an interesting exception to the restrictions on short barrel rifles, but I am not sure of its practicality for self defense.

By the time we got to stage 7, the conditions had truly reached bottom. My pants were wet from bottom to top. My shirt still dry, but as it was the only dry place to dry my hands before shooting, that piece of clothing was soon wet as well. The ground conditions were such that our squad neglected to take any walk through of the course prior to shooting. And still, we're having fun!

This stage started with engaging two targets, which I did while backing up to the next shooting position. Then kneeling behind a barrel, we faced one steel and three paper targets. Hitting the steel caused two of the paper targets to fall and be replaced with two others. Despite the conditions, this was my best stage finish of the match. 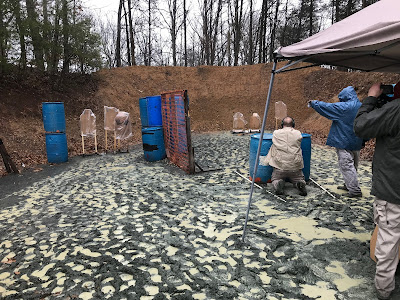 Stage 8 was a standards stage featuring both strong hand and weak hand shooting, requiring four magazines loaded to 6 rounds each. For the first string we shot the three targets freestyle, reloaded, and reengaged the targets SHO. The string was repeated, this time switching to WHO. I'd been practicing one-handed shooting, and recently made some adjustments to my grip. Still I was somewhat apprehensive as two of the targets were partially blocked by non-threats, with the most open shots being the head areas. Even though I was 8 points down, mostly from hitting the head but outside of the 4 inch circle, it was still one of my better stage finishes. I was also very thankful for the rubber Talon Grips I had recently put on the gun. My grip on the wet gun was greatly enhanced which added to my confidence on the stage.

The next to the last stage of the match contained what was probably my most memorable shot of the match. Starting with our hands on a target, we knocked over the threat, and engaged the target laying on the ground. Turning, we faced a small steel plate, set menacing close to a non-threat target. Almost forgetting it, I turned, steadied my aim and squeezed, knocking over the plate. While it wasn't an exceptionally long shot, about 12 yards, I whispered a quiet "yes" as I moved to the next position. Two more steel targets on the stage allowed me a perfect run on all steel in the match — hitting them all with the first shot — a feat not often accomplished on steel targets. 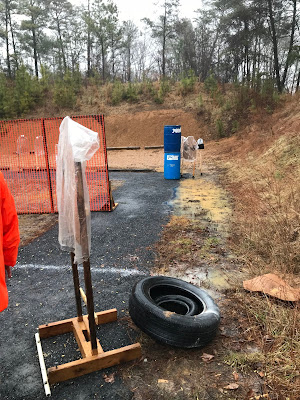 The final stage of the match started with the gun loaded with 6 rounds and placed in box, our spare magazines set on a barrel down range. We engaged three targets while seated, then moved to retrieve our reload. At the barrel, we had a choice on how to engage the last four targets. We could take the shots from that position, where only the heads of the targets were exposed over a low wall. Or we could move to a low port and shoot the full target, but from a kneeling position. The former position offered fairly close head shots, though shooting low would mean hitting non-threat targets. I opted to take the head shots. Alas, on the very last target of the match, one of my heads shots was just outside the perf, and was a miss. I had called the shot good, despite not seeing the hole through the plastic bag. I almost made it through the whole match with not a single miss. Until. The. Very. Last. Target.

Lunch was included with our match fee, and provided by Southern Bobby-Q Catering. I ate my tasty Italian Sausage quickly, while standing in the rain, before the bun become totally water logged.

Overall, the match was a lot of fun. We suffered through prop failures on a few stages, but nothing that caused huge delays. The issues with the electronic scoring forced some competitors to have reshoots, and ultimately the deletion of two full stages from scoring. The match staff had opted to use no paper backups, which was a lamentable decision. After shooting through the mud and rain, it would have been nice to have the effort count. That I felt I had good runs on those two stages only added to the frustration, though I did hear from some competitors who met the news with relief.

The condition of the ranges, as a result of the new ground cover, does give me concern for upcoming matches. Looking back through some of my previous match reports and pictures, the material has been in place for at least several months, though I've not had the misfortune to shoot there after a heavy rain. Sanner's Lake is one of my favorite places to shoot, I do hope they can resolve the problem in short order.

Despite the weather and somewhat uncomfortable shooting conditions, I was generally happy with my scores. I placed 30th of 117 Overall, and 11th of 49 in my division and class. Of course, having the one miss at the end, moved me out of the top 10. Still, with now just 2,000 rounds through the compact gun, and only three matches using it, I have little cause for complaint.

The day was long, but enjoyable. The shooting was fun and the people friendly. It's not always going to be sunny day, and shooting in foul weather can indeed be fun and safe. Capping the day off, once I was home, the gear and myself cleaned and dried, I enjoyed the exciting final few minutes of the VA Tech men's basketball team's defeat of their rivals in Charlottesville. All in all it was a good day.

I kept my phone under cover and packed away for much of the match, but did capture some pictures of the stages. They are posted here.