It's fun to go to the range, hang a target at 7 yards and shoot fast. Maybe even activate the timed turning target too. But sometimes it's good to practice the stuff that you don't do as well on. After feeling a little shaky with my one-handed shooting last weekend, I decided to start with that when I hit the range this week.

I opted to shoot the drills at 7 yards, mainly so it would be easier for me to confirm my hits, and adjust as needed. After firing the first 30 rounds SHO, I was fairly pleased, and my hand was tired. I switch to WHO for 20 more rounds. The goal in both cases was strictly pressing the trigger without moving the gun. Next time I'll add in some work on quick follow up shots. 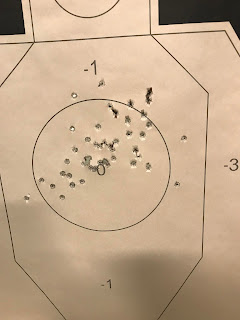 Next it was time for distance work, this time at 25 yards. I often think back to when I started this sport almost 10 years ago, I was lucky to hit the paper at that distance. (That was the case at even 10 yards!) Now at least I can keep the holes generally in the -0 zone. On this day I was contrasting my practice with the guy in the lane next to me who seemed to be hitting 1 inch dots on the paper at 25 yards — but with an optic, and a bench rest.

Next up in the "practice your weaknesses" session was 10 yard head shots. I tend to shoot low, especially at the indoor range, when aiming for the head portion of the IDPA target. This time I focused on not doing that.

And finally, I hung the target at 7 yards, activated the timed turning target, and shot fast. Sometimes you just have to have fun too!