After (enough) chores for the day were done on Saturday afternoon we decided to head over to 1781 Brewing Company and Wilderness Run Vineyards for a quick beer. I had seen a posting about a fall release that I was interested in trying out, L’ Automne Red Ale,

L’ Automne is an 8.5% ABV Imperial Red Ale with a rich malt backbone and a touch of hoppiness to balance. The beer is quite hazy and "thick" in appearance, with a creamy mouthfeel to match. Colleen opted for the Saison De L'Orange, and crisp, slightly tart, Farmhouse Ale. 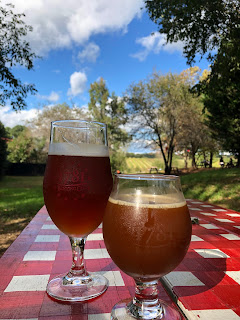 Quickly finishing our beers, we opted to enjoy another round of the same. We also grabbed some food from TÄ-KO Taqueira food truck. The beef and pork tacos were fresh, full of flavor, and we gobbled them down quickly.

Em.bargo's Cigars sets up a small seating area at the brewery on weekends, complete with a couple warm fire pits. There is also a selection of cigars on hand to purchase. I grabbed a RoMa Craft Intemperance to enjoy with my beer. Smoking is permitted throughout the grounds and we opted to find a seat at a picnic table located in some dappled sunlight. It was a moderately cool afternoon but the sun was bright, making for a pleasant time outside enjoying the view of the surrounding vineyards. 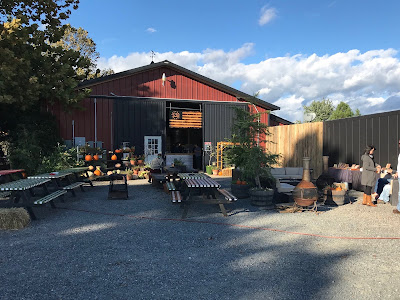 About when we were preparing to head home, some friends who we hadn't seen in a while arrived to have some drinks and listen to the band performing that evening. We were persuaded to stay a while longer, and enjoyed the conversation, the music, and another beer.