I made it to my second IDPA match of the year last weekend. I had been looking forward to shooting another match, and hopefully being less stressed than my last match outing. The morning was sunny, with just enough cool breeze to require a jacket. Really a fine day for shooting.

I'd gotten in a few visits to the range to practice the interim and felt a bit more comfortable with my return to competition. In fact as I approached the line to shoot each stage, I actually felt pretty relaxed, unlike the anxious feeling I felt during the first match after my "event."

As is usual, five fun and challenging stages awaited us. The first stage our squad shot was a "simple" stage done in two strings. Standing between stacks of barrels, we faced the right side of the stage. After shooting a target between the barrels, we made a nearly 180° turn to shoot a target behind the left barrel row. Finally a center target further down range was engaged. For the second string, we started at the same position. However, this time we ran a ways down range to find three widely spaced targets requiring three hits each. I thought this was a fortuitously good warmup stage to shake off any jitters. 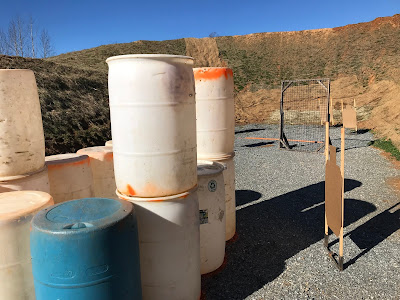 Next up was a course of fire that started at an arm's length target requiring two body and one head shot. Following that we zig-zagged around the walls to near and far targets from cover. Some of the targets required hard leans around cover. Since the "walls" are open netting, on one of those positions I was actually able to stick the gun around the corner and "point shoot" the target while looking through the fence. Although not my best placing stage, I shot the stage just one point down. 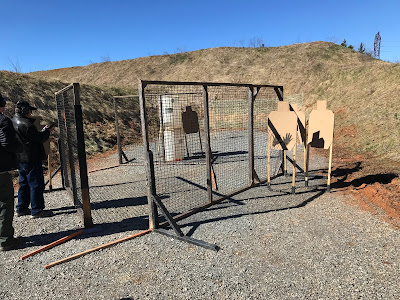 The next two stages I thought truly tested our ability to adjust to a mixture of close and distant targets. On the first we started seated, before moving to engage three very close targets. Then arriving at cover we had to slow to shoot a further target with some tight non-threat cover adding to the challenge. The rest of the stage included more shooting around walls, along with a couple more non-threat targets that seemed to be taking a beating.

After that we moved to shoot an interesting set up with three pairs of targets at increasing distance, each target in a pair was placed on the opposite side of the bay. Shooting in priority meant swinging back and forth as you engaged the targets near to far. In the center of the last two targets there were four steel poppers. The paper targets started with head shots only, followed by two partials, and finally two open targets. All shooting was done from a shooting box.

I felt good going into the stage. But I missed the first shot on steel, which seemed to shake me. Each subsequent target then requiring two shots to hit. As I remarked at the time, "At least it's good reloading practice."

The final stage was opined to be the hardest, though I think it was probably the most fun. Our unloaded guns and all magazines were placed on a table, and we retrieved them and loaded the gun at the start. The targets throughout the course of fire were mixed in with numerous non-threat targets. What made the stage extra challenging for those of us shooting in lower capacity divisions, was to avoid standing reloads we had to make two reloads with retention, or tactical reloads. That, added to the need to stow the extra magazines at the start, made for a lot to think about. 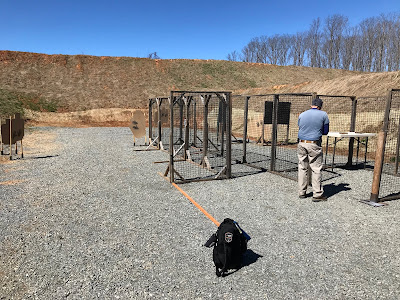 I generally avoid doing a tactical reload, which requires pocketing the partial magazine rather than dropping it like an empty mag. So often I drop the mag out of habit, then lose time picking it up to avoid the penalty. I also frequently rack the slide out of habit, ejecting a possibly needed round. Since I was the last shooter on this stage, I had lots of time to get my mind set to do two error free reloads. I also got in some practice picking up two magazines at once and inserting them smoothly into my mag pouches. The preparation paid off and I shot the stage penalty free. It was good to finish with a smile.

In the end, despite feeling relatively relaxed, I still shot faster than I saw the sights much of the time. I did have zero hits non-threats and had just one miss, on a close head shot, but shot enough -1 and even -3 hits to significantly affect my score. Nonetheless, it was a welcome and fun time spent shooting. I felt healthy, energized, and happy to back on the range with friends. I am sure it will only get better as I continue on a steady recovery path. (Admittedly, I also enjoyed a much needed nap after the workout of the match.)