Warming Up On A Cool Fall Evening

One a recent cool fall evening I broke out the only A. Smith Bowman whiskey I’ve not previously tried, at least to my memory, the Isaac Bowman Port Barrel Finished Bourbon. This lapse despite living local and even working next door to the distillery for many years. The bourbon has been hard to find for most of this year due to a bottle shortage. During a recent tour of the distillery I asked what was happening with all the Isaac Bowman sitting in port barrels and was told they had stock ready and it had been transferred to stainless steel tanks to hold. The bottle supply issue seems to have been resolved as all the Bowman bourbons have appeared in quantity at the ABC stores the last couple weeks.
The bourbon has some sweet fruit on the nose. The flavor profile is less sweet with dark fruit and a refined port influence. At 92 Proof, it's easy on the palate and has a clean, short finish with a faint lingering fruitiness. I’ve not always enjoyed port finished bourbons but this is a winner IMO. For $40 this could be a staple on the shelf. 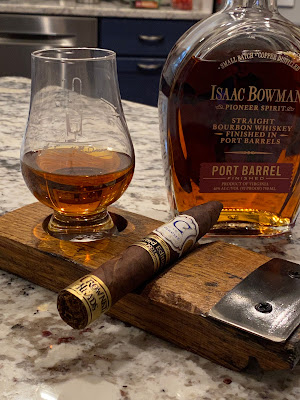 I chose one of my favorite cigar blends to enjoy with the bourbon, the Crowned Heads La Carême. I enjoy this cigar in all it's variations, but the 2021 Limited Edition Belicosos Finos is especially nice. (And now only three left in the box.)
The cigar is medium bodied with creamy, sweet notes. There's a touch of cedar spice to add some complexity and it's one that seems to go especially well with bourbons of all sorts. 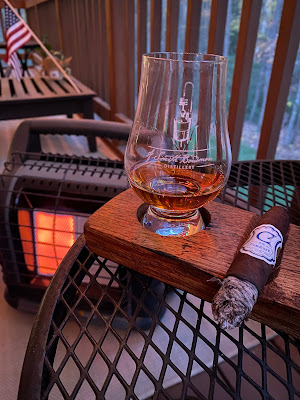 Warm days followed by cool nights . . . that's Fall in Virginia. It takes me a while to adapt to smoking in the cold, using the propane and electric heaters. At first, I'll just forgo the pleasure, but as the cool evenings become more regular, the choice must be made. I've finally broken out one of the heaters. After burning off the dust, it provided just the touch to ward off the chill. And the bourbon didn't hurt either.
Mused by David