A Beautiful Fall Day For IDPA

After a little over a month "off" from any matches, I made it to the October match at the Cavalier Rifle and Pistol Club on Montpelier. The morning was cool, and I grabbed a pair of light gloves on the way out the door. I was thankful I did, though the sun eventually warmed the air by mid-match.

With summer travel keeping many folks away over the past few months, this match seemed like a reunion of sorts, with the "full crew" of regulars on hand. It was good to catch up. As I often say, a match is a social event interrupted by occasional gunfire! :-) 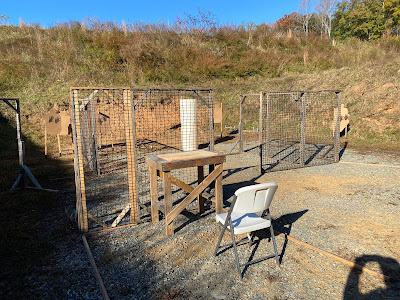 The first stage the squad shot had us seated to start, with the loaded gun on the table. After engaging targets in the open to either side, we left the chair to move through the course of fire. First to the left, then crossing back to the right to engage targets from several points of cover.

Next up was a simple, two string stage shot standing in one spot. The first string required two hits to the body and one head shot on the close target, followed by two body shots on the far targets. The second string was two head shots to each of the two back targets. A quick stage that our squad of 18(!) shooters finished quickly. 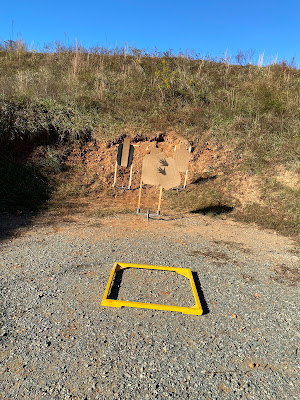 Our third stage of the morning began with us facing uprange. There were target options to either side of the wall behind us. The right target could be shot from the starting position, at a moderate distance, or we could move down range in a winding path, around a wall and barrel, to engage it from a closer distance. Most chose to add the extra steps to close the distance, while others chose the longer shot and shorter path. I elected the former. After those targets were sorted, we moved to other points of cover to finish the stage. Despite the longer path, this was my next to best stage. 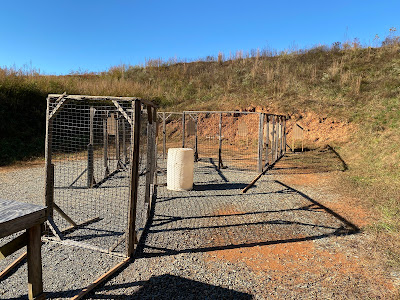 Although I generally prefer field courses to stand and shoot exercises, the next stage proved very fun. Once again constrained to a shooting box, we faced four arrays of paper and steel at varying distances. I was feeling good about my shooting, and maybe a little cocky, so I planned to shoot the first five targets as fast as I could, keeping the splits between shots and targets as even as possible. 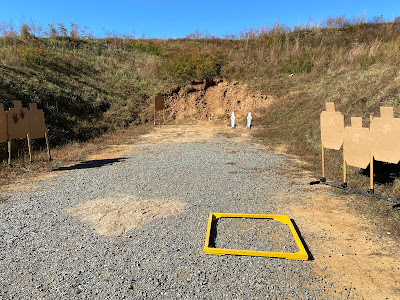 The plan paid off. I was -2 on the far paper target, but came in 3rd overall on the stage with a raw time of 8.33 seconds. I must admit, it felt a little wild, but point shooting usually does.
Our last stage of the day broke the typical "two shots on paper" mold with a Halloween zombie-style stage.  We started with just four rounds in the gun, and all reloading devices on a table downrange. All the targets were head-only and required a single shot. Starting with our hands on the pumpkin, the first three targets were engaged as we moved towards our magazines at the table. Seven more targets finished the stage. 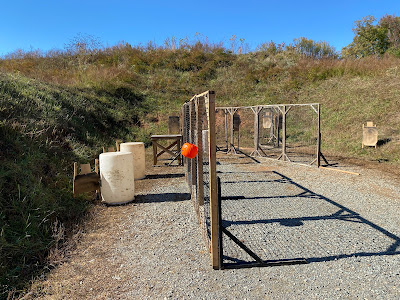 I was pleased with my results this morning. In the 10 matches I've shot this spring through summer, I've been quite happy with my performance most of the time. I've been aiming for accuracy, but finishing a little better than midfield most of the time. Aging eyes and knees, as well absolutely zero practice time on the range, having their effect. I went into the match with the intent to speed up a bit, and believe I did that. The 8 points down for the match equal my average of late, but I managed a 10th of 35 overall finish, and 3rd of 7 in SSP. 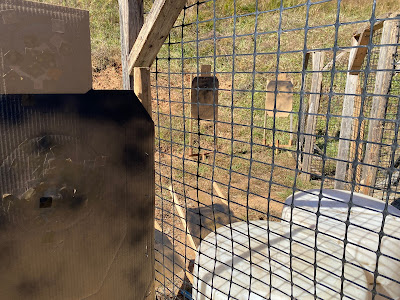 It was an enjoyable match shot in pleasant fall weather with good friends. As winter approaches, it's unclear how much more shooting I'll see this year, but this would suffice as a suitable cap.
Mused by David