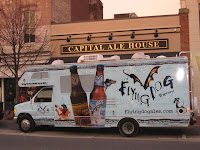 The featured brewery for this week's "Steal the Glass Night" at Capital Ale House was Flying Dog Brewery. The Flying Dog Winnebago made an appearance as well. Four Flying Dog beers were on tap, Old Scratch Amber Ale, Doggie Style Classic Pale Ale, Double Dog Double Pale Ale, and Gonzo Imperial Porter. The beers were served in a variety of Flying Dog logo pint glasses. I've attended just a few "Steal the Glass" events at CAH but this one seemed to be exceptionally well-received, and I saw plenty of Flying Dog glassware heading out the door.

I started my evening with a Double Dog Double Pale Ale. This imperial-style pale ale packs a wallop of citrus and sweet malt with, if I may say so, a pleasant alcohol kick. At 11.5% ABV, one was enough though. I finished with a Doggie Style Classic Pale Ale before I had to leave for a prior commitment.

JT, who drove the Winnie down from Frederick, MD, also brought along some bottles of Garde Dog for sampling. This is the brewery's Spring seasonal Biere de Garde. I had a small sample of Garde Dog and found it to be very tasty. The aroma is earthy and sweet and a good preview of the taste to follow. It's tough for me to compare with last year's release, but JT told me that this year's beer has "more funk." The bottles JT had were fresh off the bottling line, so expect to see Garde Dog in stores soon.

Flying Dog made a great showing in Fredericksburg. Everyone seemed to have a good time, and folks walked away with some Flying Dog swag too. I look forward to more breweries doing the same. 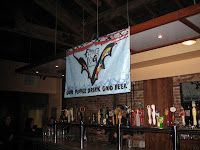