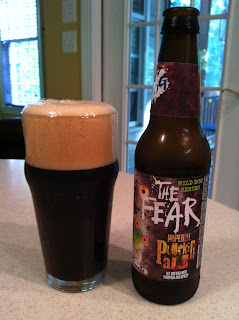 The Flying Dog Brewery shipping department has been busy lately. Earlier this week another surprise package arrived at my door. Inside was a bottle of The Fear, the brewery's seasonal Imperial Pumpkin Ale. As noted previously, I'm not a big fan of fruit and veggie beer, and while I enjoy the occasional pumpkin beer, I don't seek them out. Examining the (always interesting) Flying Dog label I see "brewed with pumpkin and spices." One of my beefs with so many "pumpkin beers" and that it's all about spices, nutmeg, allspice, cinnamon..., there's not any pumpkin detected, if involved at all. The accompanying flyer reads "we've stayed true to the season by using local pumpkin in the mash." Okay, let's give this a shot.

Flying Dog The Fear pours a dark, ruby-brown color. The beige head is thick and persistent. Immediately I could detect the prominent aroma of spices, and yes, squash. There's some nutty sweetness in the aroma too. The flavor is dark, rich malt backed by mild spices. As with the aroma, I can taste the pumpkin. The finish is moderately bitter with some lingering spiciness.

Although I was skeptical, I did enjoy The Fear. I probably won't go out and buy a six-pack, but that's my individual preference. I'd recommend it strongly for fans of pumpkin beers. If I was out for a beer and found this on tap, I think I'd have another. Thank you to Flying Dog for allowing me to try a beer I probably would not have selected left to my own devices.
FTC Notice: I drank and reviewed this beer of my own free will. No compensation was received for the review.