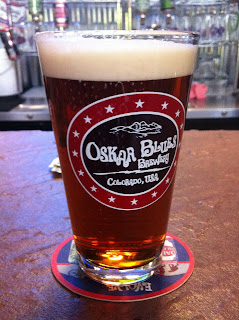 My last stop during my quick visit to Longmont, CO, last week was the Tasty Weasel Tap Room at Oskar Blues Brewery. I had been told they regularly tap limited beers, so I was curious to see what they might have. I saw a special beer tapping list, but it turned out I was in between events. In a poor choice of words I ask if they had anything unusual on draught, to which the reply was "All of our beers are unusual." Touché.

I then learned that G'Knight Imperial Red Ale was being served from a nitro tap. G'Knight is a very good beer that takes the sweet malt profile of a Red Ale and ramps it up with citrusy hops, hence the "imperial" in the name. It was one of the beers I had enjoyed the prior evening at the Oskar Blues restaurant, served in the usual CO2 method. The nitrous pour gives the beer a frothy head, but without a side-by-side comparison I couldn't comment on the difference. I'll just say I enjoyed it very much.

I nursed my beer while chatting with other patrons at the bar. I started talking with a couple of guys I had seen drinking over at Left Hand earlier that evening. It turns out they both work at Boulder Brewing Company. How cool is the craft beer world? I was sitting at Oskar Blues, talking about beer with two brewers from Boulder Brewing, after we'd all just departed the Left Hand brewery tasting room.

It also turns out that my visit coincided with the monthly meeting of the Can Can Girls Beer Club. This is a group for women craft beer fans. Later in the evening the bartender brought over some special beers that were left over from the club's tasting. The few of us that were still at the bar were treated to pours of some barrel aged Oskar Blues beers. I didn't bother to take notes but I recall, among others there was a Ten FIDY aged 4 months in whiskey barrels and G'Knight aged in Merlot barrels. I felt privileged to share in these one-off beers.

It was a fun way to end my short visit to Colorado. Each time I visit the greater Denver area I am amazed how many great beer experiences I have. I didn't plan for anything specific, but just happened upon some good times. I think the density of breweries in the neighborhood certainly makes it easy to find good beer, and people to enjoy it with. In comparison, despite sharing the same city name in our mailing address, a visit to my favorite local pub, at Blue & Gray Brewing, requires at about a 30-40 minute drive from home. It's just not as convenient as a 5 minute drive, or even a short walk, as I've enjoyed these past couple of days.

But then again, it's probably good that I can't do these whirlwind beer tours everyday!