Saturday morning I headed to the Cavalier Rifle and Pistol club for the monthly USPSA match put on by the Greater Richmond Blasters. I had not even touched my gun, other than to clean it, since the Fredericksburg match two weeks ago, so I was really looking forward to shooting again.


Our squad started on the classifier, "Can You Count?" I've shot this classifier before with a really good time, but on this run I fumbled the second reload and dropped the mag. That bummed me a bit since my reloads are typically pretty smooth and consistent.

That classifier out of the way, we moved on to the four fun field courses. Stage 2 started with the shooter seated and facing down range. After engaging a couple of targets, you ran up a ramp and engaged more targets from atop a platform. Returning to ground level, there were more targets before the final three hidden behind an inclined platform. You had to climb and perch on the incline to shoot the last targets. During my walkthroughs, I stumbled twice going up the first ramp, but perched perfectly onto the second. During the actual run, the first platform was handled without issue, but I had to catch myself on the second, but still managed an 8th place out of 24 finish on the stage. 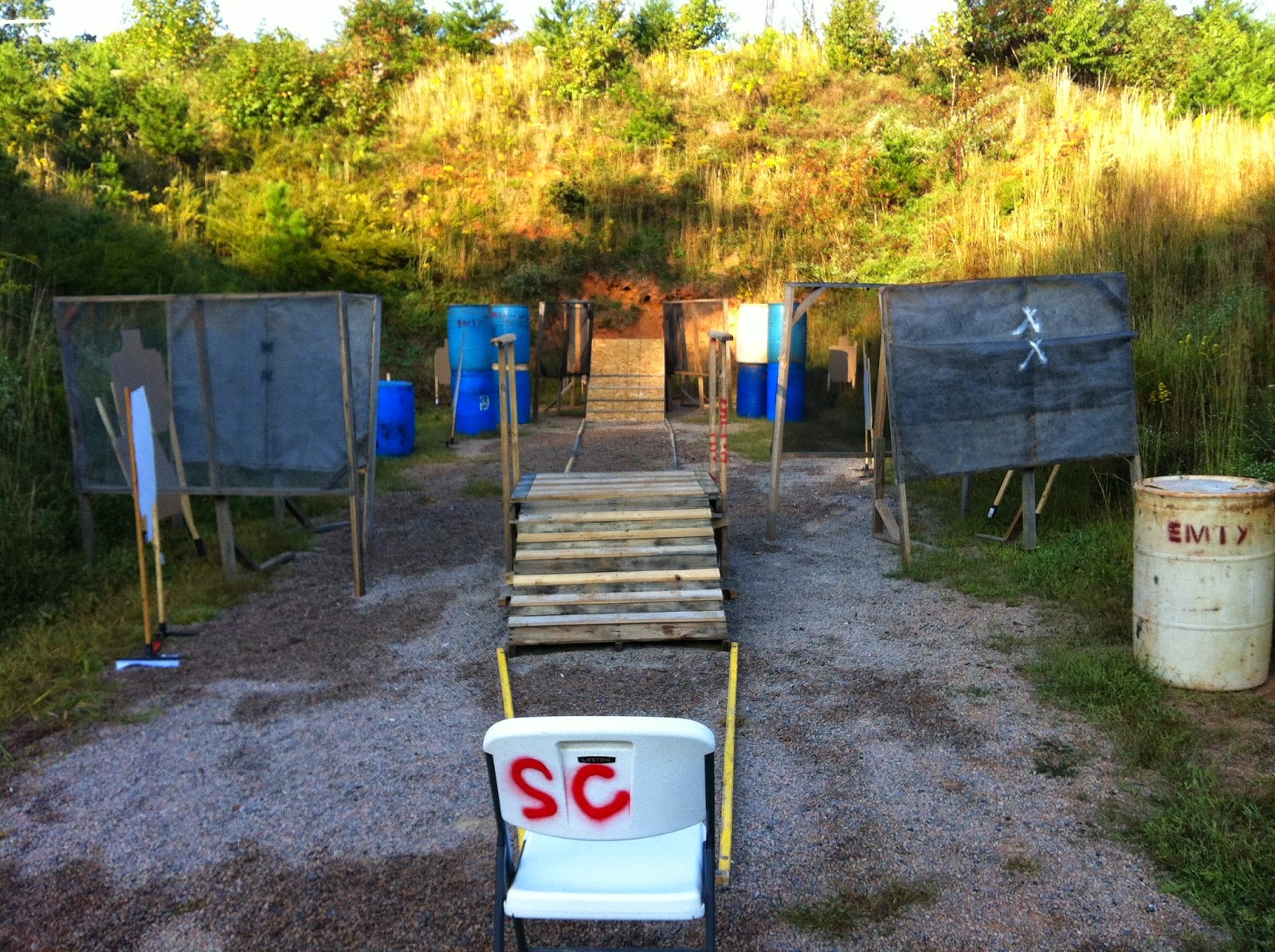 Stage 3 was another seated start, this time facing up range. After standing and turning, the shooter headed into a circular course of fire with small, and low, ports to shoot through. Upon entering the free fire zone you had to make a sharp left turn and get into a tight corner to shoot the targets through the first port. The course ended with the shooter dropping to knees and shooting from another tight corner. It was a very interesting and fun stage. I finished the stage in 6th place, as I would for the next two stages as well.

Stage 4 was a quick shoot with seven stationary targets and two swingers activated by a stomp plate. The shooting area was limited to a 2"x4" area. The two swingers were weighted differently so one swung faster, and for longer, than the other. Some shooters opted to hit the stomp plate starting the swingers first, step back to engage the stationary targets, then return to the slowing swingers. I opted to shoot the outer four targets, then move to the stomp plate and engage the final three. The swingers were still moving, but I got my hits. 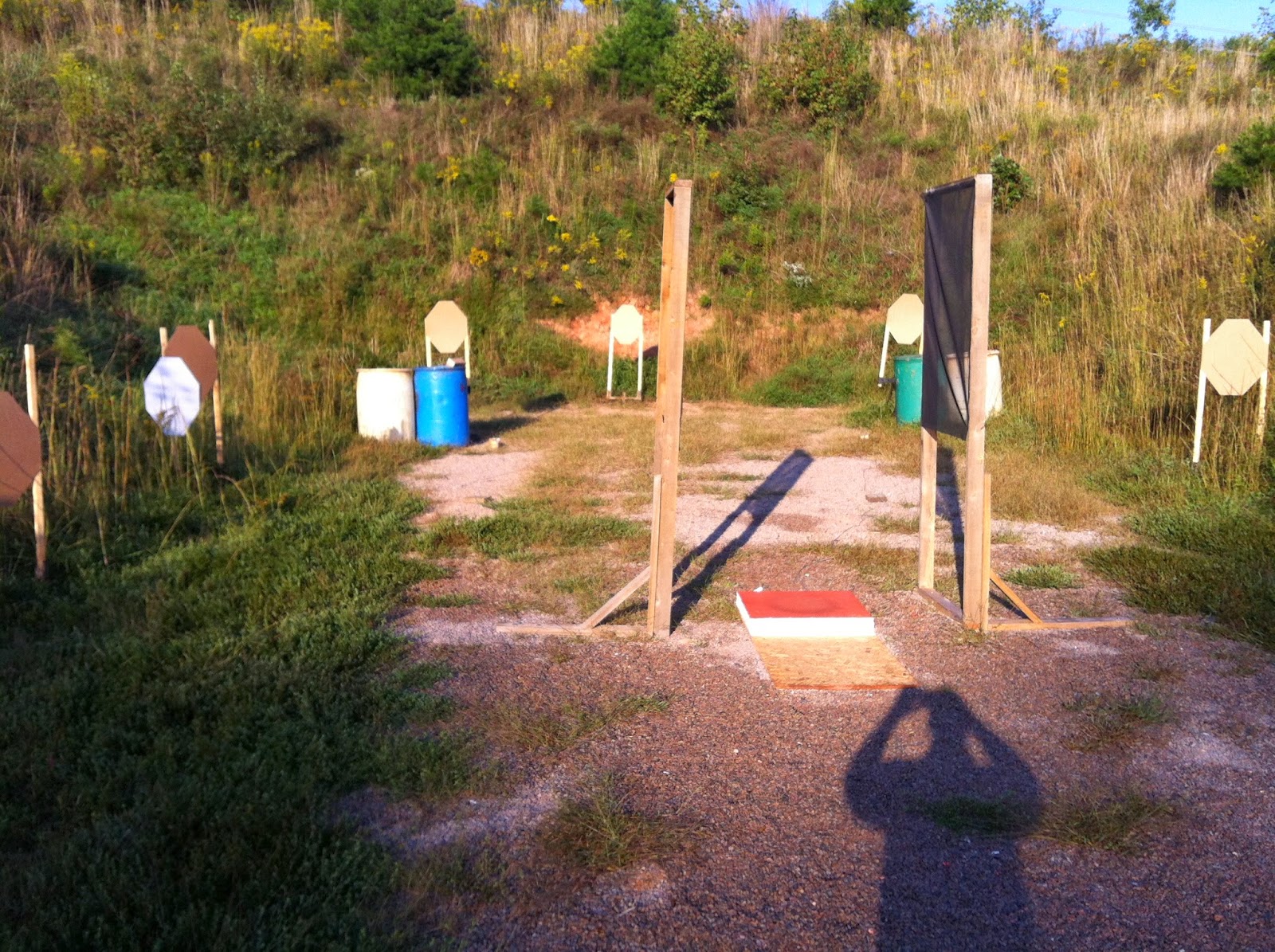 The final stage was a "typical" USPSA field course with targets on both sides of a winding path. I did spend some time before shooting trying to decide exactly from where I wanted to engage the paper and steel targets and when to do my reloads. There were lots of options, some of which would require slide lock reloads, or ending the stage with an empty gun. The layout did force the shooter into a couple of corners. I opted to take a couple longer shots in the interest of managing reloads, even though the targets would be closer later from the forced positions, and was pleased with my run.

This month the organizers opted to have five stages, four field courses and a classifier, instead of the usuals six stages, with one bay holding two. In my opinion this worked out quite well. I am happy to settle for a lower round count to avoid the backups that so often happen with the doubled up stages. We were done shooting before 1:00PM.

I was quite happy with my shooting on this day. In reviewing the videos, I felt a lot of my movement looked sluggish, but I still finished 7th out of 24 Production shooters. I had no misses or hits on no-shoot targets, and even hit one-for-one on all the steel. It's the simple things that make for a good match.

I enjoyed the Cavalier match very much. The atmosphere is relaxed and the stages are always interesting. On top of that, the drive is easy and the half day match leaves plenty of time to do other fun stuff later in the day (or simply relax and recover.)