I headed out to Charlottesville on Saturday morning for the monthly IDPA match at the Rivanna Rifle & Pistol Club. The drive took me through some early morning fog, but that quickly burned off as the afternoon temps climbed into the high 80's. Not unbearable, but certainly a hint of what's to come later this season.

Due to range scheduling conflicts, the match director made some last minute adjustments, setting up one of the stages in the indoor range. For this quick and fun stage, we started facing up range, holding and looking through the view finder of camera. At the signal, we turned and engaged eight targets placed among four non-threats. Finishing that stage, we jumped in our cars for the short jaunt over to the rifle range for the final two stages. 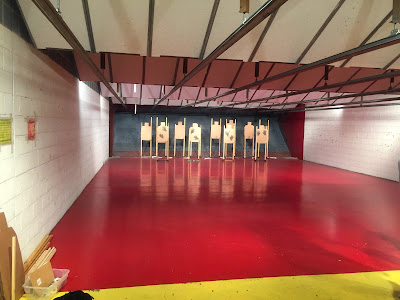 The next stage simulated being seated in the back of a bus when bad guys entered. From your seat, you engaged three threats which were well-blocked by other "passengers." A careful aim was required. Those threats taken care of, there were 5 more "outside" the bus; three to the left, 2 to the right, with additional non-threats on both sides. Despite a number of shooters, myself included, having hits on non-threats, I think most folks really enjoyed this challenging and creative stage. 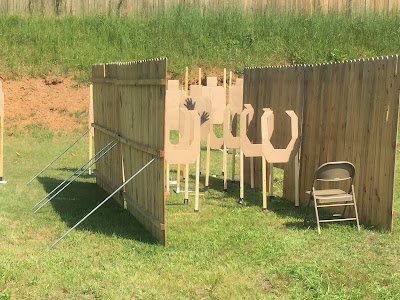 The third and final stage had the longest shots of the day. The eight targets were all engaged from behind cover from several openings in a long wall. I was reminded on this stage that I still need work on shooting while leaning around cover, as I was very inconsistent in my hits, earning several misses on the stage. Sometimes I wish I could shoot a stage over, not for score, but just to do it differently.

This was a fun match, with lots of variety. The delays due to having two stages on one range were actually minimal and when we did wait, the time quickly passed in conversation. Still, we were done shooting before 1:00 PM. Despite the issues on the last stage and a few other poor shots, I was happy for a decent finish; 6th of 22 in my division and 9th of 41 overall. Kudos to the staff at Rivanna for handling the last-minute range issues and putting together a great morning of shooting fun.