This morning was the monthly practical pistol "practice match" at the Cedar Mountain Youths Range. As I headed out for the range, there was a steady misting rain falling but it fortunately stopped before we started shooting, though it remained overcast all morning. Fifteen of us enjoyed the six interesting stages that match director Mike had set up. The stages were not complex but offered varying challenges.

The first stage was a basic "shoot and move" stage with three targets. We put two hits each target, performed a mandatory reload while moving to a closer shooting position where all three targets were engaged again. As I sometimes do on close and fast stages, I pulled across the middle target too fast and earned a miss. I knew it when I did it, so why I didn't take a make shot will remain one of life's mysteries.

On stage 2 we started seated, with the unloaded gun and all magazines on a table. The course required one hit on each of six targets, a mandatory reload, and one more on each. The twist on this stage was that the fifth target was placed much further downrange, about twice as far away as the next closest target. More than one shooter swung right by that far target, failing to shoot it. I did swing past it once but stopped myself before moving all the way to the last target. 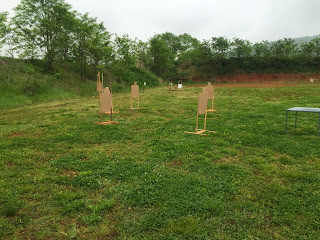 Next up was a "simple" stage consisting of a swinging target with two pieces of falling steel on either side. The swinger was activated by the shooter pulling a rope held in his strong hand at the start. The moving target required six hits, instead of the usual two, so it took a few passes of the target to complete the stage.

On Stage 5 the shooter stood behind a barricade and barrel combination facing three targets set up down range. Each target was to be engaged from three positions — the right side of the barricade, the left and through the barrel — with a mandatory reload anytime before the last shot. 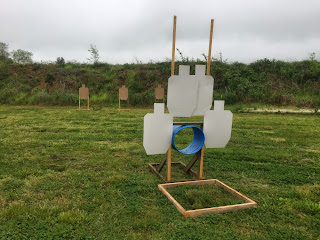 To summarize, we had near targets, far targets, moving targets, steel targets, shooting on the move, shooting around barricades, reloads on the move, shooting through a tunnel while kneeling, shooting while seated, as well as strong hand and weak hand only shots. For an informal match, that's a wide variety of shooting. Since it's just for practice, it's low pressure. It's all about shooting for fun and enjoying a morning on the range. And as a bonus, we were done shooting and had the match put away before noon. That's a decent way to spend a Saturday morning, and it has amazing health benefits too.