There's another new brewery in the area! 6 Bears & A Goat Brewing Company opened just a week ago and we made it out this weekend for a visit. The unusual name is a reference to the owners' military service. The six Bears are retirees from the U.S. Coast Guard and the Goat is retired from the U.S. Navy. The brewery's logo has an interesting story behind it as well.

Like many craft breweries, 6 Bears & A Goat Brewing is located in a commercial/industrial park. But the facility is not something just dropped in behind a couple garage doors, it's a fully finished pub. There's a large table seating area as well as bar seating.

As we took our seats at the bar, a small bowl of pretzels was placed in front of us. (And was continually refilled during our stay.) Bonus points right there. I've often wondered why so many pubs no longer add that small touch to their service. Now, to the beers...

We opted to start with a sampler flight of all eight beers on tap. The flight came in an interesting "life ring" serving tray. The beers, in order were; Red IPA, Rye IPA, American Pale Ale, Blonde Ale, Scottish Ale, Irish Extra Stout (on nitro), Amber Ale, and American Wheat. There's definitely something for every one. 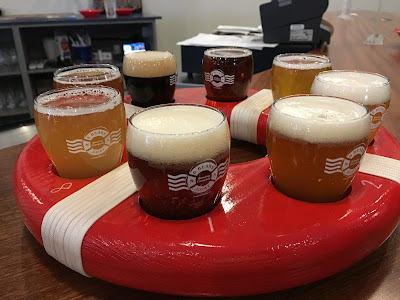 Overall, the beers were well-done and distinctive. The flavors were full and true to the styles they represented. Of all the beers, only the Scottish Ale disappointed; I prefer a sightly richer Scottish Ale. However I even enjoyed the Wheat, which is one of my least favorite styles of beer.

At the end of our flight tasting it was time to pick our favorites to enjoy as full servings. That took a bit of thought as Colleen and I both had multiple favorites. For me, the Rye IPA and Amber Ale were both exceptional brews. Colleen noted that the Irish Stout and American Wheat stood out.

I eventually opted for a pint of the Rye IPA. The floral and citrus hop flavors combined with just the right malt base for a flavorful brew. Colleen chose the Irish Extra Stout on nitro. This dark brew finished with a pleasing roasted and bitter malt bite.

6 Bears & a Goat has not forgotten the drinker's need for food either. Currently they have a couple of sandwiches and a cheese spread and cracker plate available. The food is prepared by local award-winning restaurant Foode. A full menu prepared in an onsite kitchen by the folks at Foode is coming next month. We enjoyed the cheese and crackers with our beers. 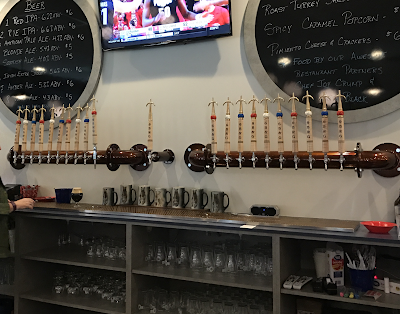 We were impressed by both the beers and the setting at 6 Bears & a Goat. The brewery and brew pub seemed well-thought out and finished. We commented as we left that the brewery seemed ready to open when they did, as opposed to the half-finished state we've observed at many new brewpubs. We're looking forward to going back soon.

Email ThisBlogThis!Share to TwitterShare to FacebookShare to Pinterest
Links to Related Musings: 6 Bears & a Goat Brewing