This weekend's IDPA match at the Fairfax Rod & Gun club had four stages offering some interesting and enjoyable shooting challenges. It was also quite a pleasant day weather wise, especially considering we're in the middle of July.

The first stage our squad shot started with us facing a non-threat target, with two very close targets to our right. We turned to shoot the two close targets from retention, before engaging two more distant targets while backing up. To finish the course of fire there were four more targets shot from cover, two of which were head shot only targets. It was fast but fun stage. A lot of folks had never shot from retention prior to this, so they had a new experience here. I finished -0 on the stage. 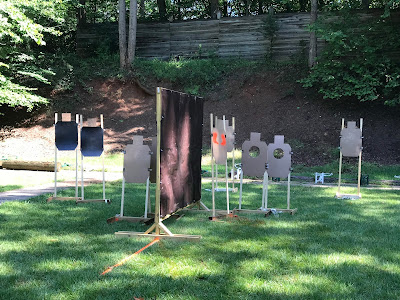 The next stage was a standards stage with three strings — shot freestyle, strong hand only, and weak hand only. Shots were limited to one per target each string, and fired on the move at six reduced scoring zone targets. I do try to practice one hand shooting regularly, and feel fairly confident while standing still, but I have no opportunity to do it while moving, unless it's in match. I know I had a couple misses, and a bunch of -1 shots, giving me a big 15 down for the stage. 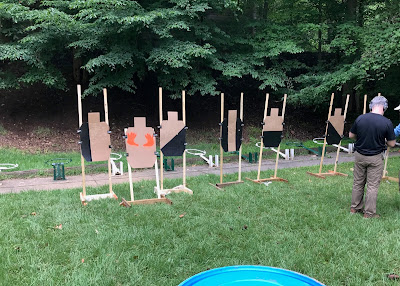 As we were making our way to our third stage, we could hear ringing steel coming from the bay. Then I caught a glance of a swinging target and knew what was up next. We started this stage behind a barricade holding a "cell phone" in front of our face. Dropping the phone, we engaged a fallen popper to activate a swinging target, which we shot while on the move across the bay towards cover. From cover we shot 4 paper targets and another falling popper. It was another -0 stage for me. 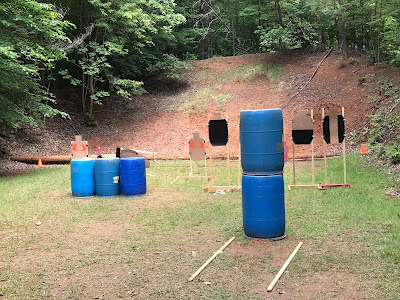 The last stage of the match consisted of just three targets, set between 25 and 35 yards. There was a lone non-threat place about center view down range as well. This was going to be the toughest challenge of the day. I've done very little long range shooting of late, and have been less than satisfied with the results. However, I had fortuitously worked on 20 yards shots during the range trip on Friday, and the success that day did help boost my confidence here.

This stage was on a mostly shaded bay, and there was a cloud cover at the time. Though I never thought I'd say it, I lamented not having the bright sun in the afternoon at a match. To my eyes the targets were quit faint in the distance.

Four hits were required on each target. My shooting plan for the stage included a few extra shots on each increasingly distant target; 5 shots, 6 shots, reload, 7 shots. While shooting, it seemed to me that the front of the pistol was dancing all over the place in relation to the target, though I did feel confident in my sight alignment. With great anticipation I walked down range to hear the scores called out. "Down 0. Down 1. Down 2. Non-threat clean." To say I was pleased with the -3 was an understatement.

In general I was happy with how I shot. I need to work more on strong hand and weak hand shooting, but otherwise it was a good day. Overall I ended up 10th out of 75 shooters, and 3rd of 9 in SSP Sharpshooter. Not bad for a guy "that old."

This match is becoming more popular and the club is working to accommodate an increasing number of shooters, though the large crowd makes for a long day. The four stage match took five hours to complete, but it was a most enjoyable way to spend time. Shooting well always raises the fun level up a notch or two, and this month's match was especially fun I thought.