For last Sunday's IDPA match at Cavalier, I decided to shoot in the Compact Carry division. I used the SIG P320 Compact in an IWB holster. I've only put about 700 rounds through the gun, all while standing at the "square range." I figured it was time to run it in a match.

The weather was very pleasant as we shot the three stages. We started the first stage standing at the center of a wall. Moving to either side, we engaged three paper and two steel targets. Moving then to the opposite side of the stage, we found a mirrored target set up. The four center targets were partially blocked by non-threats. I shot much too fast on the stage, and my shots were not well placed. As a friend noted, "You can't shoot as fast as you do with the 5" guns."

The second stage consisted of two strings. For the first string our unload gun was staged in a box, sitting on a barrel, along with the magazines. We started out seated on the other side of the wall. Running back to our gun, we loaded and engaged four targets from cover. Grabbing a reload from the barrel we then dropped to a knee to shoot under a wall at two more targets. It was a quick, fun run. 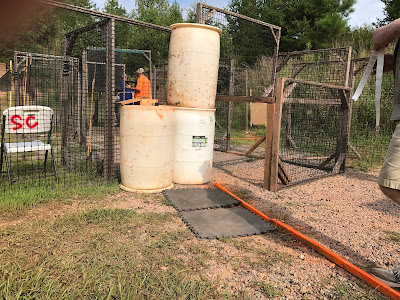 For the second string, we started with the gun loaded and holstered. Progressing through the course of fire, we maneuvered around walls shooting targets from cover. Arriving at the final position we faced two steel poppers that were narrowly exposed between steel hardcover and a barrel before hitting the final two targets. After I finished the SO tapped me on the shoulder, pointing a still standing popper, "That ping you heard was a hit on hard cover." My brain heard the hit and registered a hit on target, but I had instead hit the hard cover steel and didn't even notice the target steel hadn't fallen. Well, they say call your hits, don't watch for them. Oh well.

The final stage saw the use of a somewhat creepy prop, we called Chuckie, which we cradled lovingly in our off hand for the start. We had to carry the "baby" with us as we moved through the course of fire. It was our option to shoot one-handed holding the baby, or set him on barrels that were placed at each of four shooting positions. I chose, as most shooters did, to set the doll down each time and shoot two handed. Fortunately we were only required to hold him in a caring manner at the start. 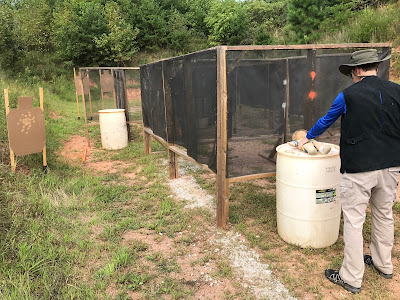 After that last stage I felt as if I was finally finding my groove. As I reloaded my mags, I was looking forward to the next stage. It wasn't until the last shooter in the squad finished that I realized that the match was over — there were no more stages on which to play!

I shot not nearly as well as I would have liked. I made a few mental errors, but most of my trouble was, frankly, shooting too fast. If I look at where the four CCP shooters fell overall, it doesn't feel as bad, but frankly I know I can do better. Despite that, I had a great time shooting the smaller gun. Interestingly, I didn't experience any issues drawing from the inside the waistband holster rather than my usual competition, OWB holster. Despite a poor finish over, it was fun morning spent shooting interesting stages with good people. That's what it's really about after all. I have plans to shoot the compact gun in the CCP division in the future, but perhaps a little more practice is in order first...