Last Saturday was the release day for Sugar Shack Samoa Porter at Strangeways Brewing in Fredericksburg. This beer is inspired by the Tastes Like A Samoa™donut from Sugar Shack Donuts. To compliment the beers, a "donut hole" Samoa donut was given out with each glass of beer. Colleen and I headed over early and enjoyed a late "breakfast" of a donut and beer.

Sugar Shack Samoa Porter pours a deep black color with a thin beige head. The aroma is sweet chocolate and molasses. The chocolate theme carries into the flavor, adding a hint of bitterness. The mouthfeel is smooth and moderately thick. We both enjoyed the beer, and the Samoa donut hole, though we agreed that having full sized examples of the donut available for sale would have added to the pleasure. 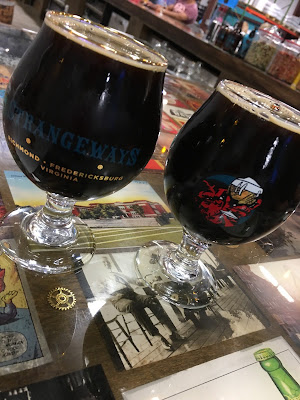 Since we were bringing a couple bottles of the Samoa Porter home, we opted to try a few more beers from Strangeway's extensive tap list. Colleen opted for the Strangways classic, Woodbooger Belgian Brown Ale. I selected Always Forward New England Pale Ale.

Of course, one does not survive on breakfast alone. So as we sipped our beers we also enjoyed some delicious Puerto Rican food from the Will's Place food truck. We started with Nachones, a dish of fried plantains with slow roasted pork, lettuce, tomato and Coqui Sauce. A couple of "Zeke" empanadas, made with jalapenos and pimento cheese, rounded out the meal. The food was very flavorful and reasonably priced. Will's is a regular visitor at many of the local craft breweries, but this was our first chance to try out their food. We'll definitely keep an eye out for Will's mobile food in the future.

The weather was extremely pleasant and we were enjoying our outside table. With no other plans for the afternoon, I opted to try Strangeways Nottingham Striker English Mild. We also could not resist ordering a couple more of those tasty empanadas from Will's. The English Mild was not as strongly flavored as the prior beers, as expected, but was well done. At just 3.8% ABV is was a fitting finish to a most relaxing Saturday afternoon.