The monthly match at Sanner's Lake Sportsman's Club was held on a very cold Saturday morning. It was to be my last match of the season and I wasn't going to miss it. However, I was having serious doubts about my sanity as I drove to the rendezvous point to meet top with travel companion Stuart. At least it was a shared insanity and sure to be a good time.

A smaller than usual crowd of hearty souls turned out for the match, but the staff at Sanner's Lake stood up their usual high quality match. I was shooting the Compact P320 in the CCP division on this cold morning in preparation for the Chesapeake Cup in February. 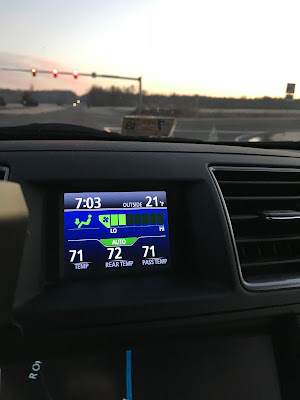 The first stage we shot had us facing four paper targets and two steel poppers which were backed by non-threats. Hitting the steel targets activated four more paper targets which replaced the first four. Target shooting order was important here. My knees were knocking from the cold and I had some trouble steadying the gun over the shivering. I hit one non-threat and my shots were scattered, but it was a fun stage nonetheless. Our squad ended up breaking down this stage at the end of the match and I was tempted to ask the SO if I could shoot it again for no score.

The next stage started out with the loaded gun on a table and we began 7 or so yards back from the table. Running to the gun we stepped on a pad that activated a swinger. The swinging target and five other targets were arranged in a line with some non-threats interspersed. Again, my shots were scattered and I earned more than a few points down. But at least the sun was starting to peak out from behind the clouds.

The third stage began with two close targets engaged while backing up. Moving to the left there were two targets shot around cover. We then moved right across the stage to shoot two more targets through a port. A quick sprint to two arms length low targets over some barrels finished the stage. I felt good about my run but was still 4 points down, though it was my best stage finish at 9th overall. 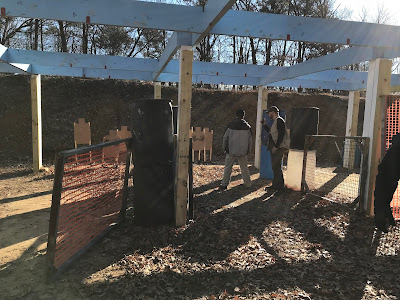 Moving on to the next shooting challenge, the sun was out, and the temperature had crept above freezing. The run began with three targets engaged around cover. There was one non-threat in the array and all the targets offered head shots as the largest part of the target. Moving to the next point of cover we faced three steel poppers and a paper target. One of the poppers and the paper had non-threats placed to add to the challenge. All paper required three hits each.

The SO and I laughed when as soon as I moved to the starting position a strong breeze blew up — and just when I was getting warm. I headed to the first shooting position and promptly shot a perfectly aimed head shot right on the non-threat! Arrgh! Moving to the next position I hit the first steel when I heard "Stop!" yelled. Fortuitously, the wind had blown over the paper target; I was getting a reshoot. (Maybe God is an IDPA shooter.) Quickly grabbing fresh mags I ran the stage again, this time just 2 points down. 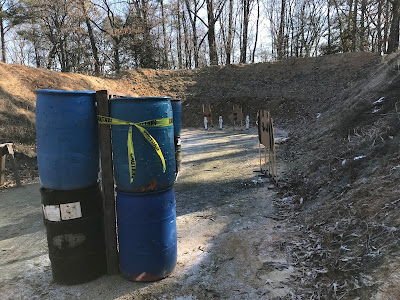 With two stages left to go, the sun again went behind the clouds and we returned to the shady side of the range. The snow on the berms giving visible evidence of the cold. This next stage was shot from behind both ends of a wall of barrels, with the target arrangement mirrored on either side; an open target on the outside, a falling steel plate, and a swinger that was released by hitting the steel. The four paper targets all required three hits each. The left side swinger was much faster than the one on the right. It may have been one of the fastest swinging targets I've encountered of late. After I hit the steel, and the swinging target made its first appearance, I momentarily stopped to look over the gun to see where it went! I managed 5 of the six hits required on the moving targets.

The final stage was a standards stage requiring us to shoot weak hand, strong hand and freestyle. In a twist from the usual, it was all done in one string, six shots for each of three targets. All three targets were partially obscured by non-threats. We loaded three magazines with six rounds each for the stage, and the gun was holstered and loaded. Drawing, we transferred the gun to the weak hand and fired six rounds to a 7 yard target on the left. Moving the gun to the other hand and reloading, we then shot a 10 yard target to the right. After a final reload, the 15 yard center target was engaged with six rounds freestyle. Many of my shots on the last two targets were out of the -0 zone, but avoiding the non-threat. However, despite being 14 points down, I hit no "good guys," in what I felt was satisfying finish to the match.

I was not as accurate with the compact gun as I would have liked, though I was generally pleased with my shooting. There were too many -1 hits throughout my match. I did feel that I ran the stages smoothly and according to plan. Despite some sloppy shooting I finished 17th of 41 shooters overall, and 3rd of 10 in the Compact Carry Pistol division. My take away from the match is that I need to focus on getting a slightly better sight picture before breaking the shot with the smaller weapon. (I also learned I really do not shoot well in the cold!)

As is usual for the Sanner's Lake match, all six stages were finished in under three hours. The match was a lot of fun despite the frigid temperature and provided a satisfying finish to a great season of shooting. Now it's time to look forward to next year, and of course lots of dry fire practice to prepare.

I posted a few more pictures of the stages here.