My plans to shoot last weekend were sent awry by the extreme cold. After the match at Sanner’s Lake was cancelled, I hoped for a visit to the indoor range at Winding Brook. In the end though the drive on a cold Sunday morning did not inspire. Instead I got in a couple of long dry fire sessions, and Colleen and I enjoyed a very relaxing weekend at home avoiding the cold.

However, the end result was that I itching to hit the range this week, and so scheduled a lunch break to do just that last Tuesday afternoon. On the first day in what seems a long time, it was above freezing outside when I pulled into the parking lot. As good timing would have it, the only other shooter was sweeping up his brass as I entered. I had the range to myself as another patron did not arrive until I was picking up my brass and preparing to leave.

Despite the relative warmth outdoors, a balmy 48°, upon entering the range I noticed I was seeing my breath fog in front me. I set out a small thermometer I had in my bag and watched the digits drop as I shot. As is often the case in the older facility, the indoor and outdoor temps were essentially the same. (We really do get spoiled with the conditions provided by modern indoor shooting facilities.) 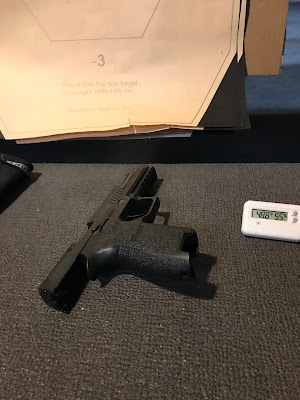 After a couple weeks of intense, but quiet, dry fire, that first live fire shot was admittedly somewhat startling. Cool temps notwithstanding, it was a very productive and satisfying practice session. I have been experimenting with some minor changes in my grip, especially for SHO and WHO shooting, and was quite anxious to try it out in live fire. It's an ongoing trial but I was happy with the results so far.

Despite almost daily dry fire practice, this was my first range trip of 2018. It felt like a good start to the year.