I Did a Little Shooting!

The combination of an encouraging report from my cardiologist and some unseasonably warm February weather made for the perfect time to head over to the range Friday afternoon. This was the first time I've shot in 2019, and despite some apprehension, I was excited to be on the range.

I took the SIG P320 Compact, and only 100 rounds of ammunition. I knew I'd be tempted to overdue it, so I set that limit before I left the house. I set up one of the colors and shapes targets, and hung some clays from the rope. All shooting was done between 7 and 10 yards. 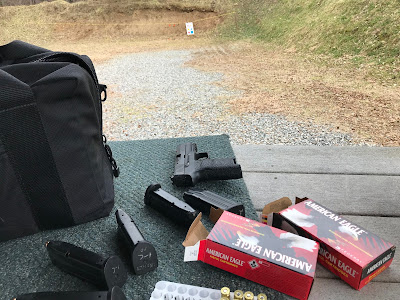 I wasn't overly pleased with my accuracy at the start. The groups were loose, although I did manage hit the clays fairly consistently out to 10 yards. By the end of the two boxes of ammo, I was feeling better, but still need some honing of my very stale skills.

As I was setting up, interesting conversations started up with others at the range. When I arrived, a shooter was picking up brass after shooting his new SIG P365. As we chatted, one of the guys who had been fishing came over to his truck that was parked near the bay. He then showed us the SIG P229 he was carrying. It turns out also that he used to shoot IDPA and 3-gun, and had been considering coming down to the IDPA matches at Cavalier. I let him know I shoot those matches frequently and encouraged him to do just that.

Overall it was a very enjoyable outing. I got a little shooting in, and had fun chats with other SIG Sauer enthusiasts. It was a break I absolutely needed.