A Slew of Weekend Treats

The weekend was mostly more of the same, although there were a few niceties thrown in to the mix. Lord Northam has granted a few freedoms to his subjects in some areas of the state, so we saw a bit of normality. I had already squeezed in mowing the lawn on Friday, which left my Saturday morning a little more open, so I drove over to the local chain coffee franchise and treated Colleen and myself to a cup of frou-frou coffee. As I sat in the drive-thru line that wrapped twice around the building, I anticipated what I predicted to be a great cigar pairing.

I had first smoked the new Rocky Patel Number 6 last fall at a local lounge. I found the cigar to have an enjoyable flavor, but not the robust bold notes to which I typically gravitate. However, as a morning cigar with coffee, it held great promise. 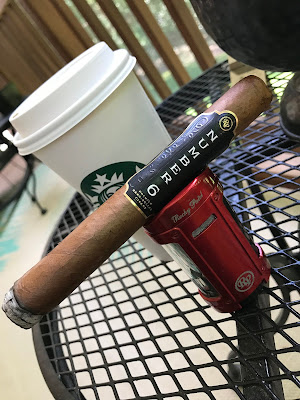 Coffee, earth, and a touch of sweetness come through in this smoke. As predicted the pairing with the creamy coffee was delightful. The one cup of coffee was insufficient for the two hour smoke from this toro size cigar. I made my myself a mug of rich, french roast to enjoy. The cigar was just as pleasant with the coffee black as it was with the milk-rich version. Though one of the mildest cigars from Rocky Patel, the Number 6 has plenty of flavor to remain interesting to the very end.

Saturday's other treat, was the arrival of a summer fun care package from Tröegs Brewing. Samples of four of their summer ales were included. It's been a while since we were able to review some beers, so it's with much anticipation that I look forward to cracking those in the near future. 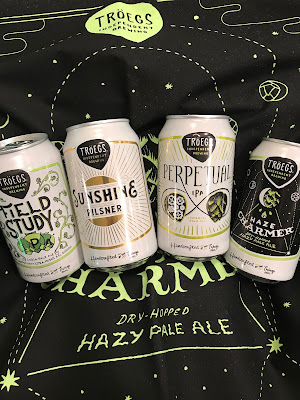 On Sunday, we shopped for, and then planted some new ornamentals around the house. The labor done, Colleen and I decided to take advantage of the government "permission" for restaurants to serve patrons at outdoor seating. We headed over a local ice cream stand and treated ourselves to some good ol' fashioned banana splits. These were the real deal; three flavors of ice cream, strawberry and pineapple toppings, whipped cream, cherries on top, and even some peanut sprinkles. We sat outside, at tables, and there were other people at nearby tables, and for a moment we could all forget about the plan-demic. And the splits were delicious!

Coming home, we decided we weren't hungry for dinner. No surprise there. So I retired to the porch with a cigar. Going to the extreme flavor opposite of Saturday morning's cigar I opted for a La Flor Dominica Double Ligero Maduro. This LFD is a full-bodied, full-strength smoke, and one I enjoy regularly. Since I was still stuffed from the afternoon "dessert" I opted for only my bottle of water to accompany. 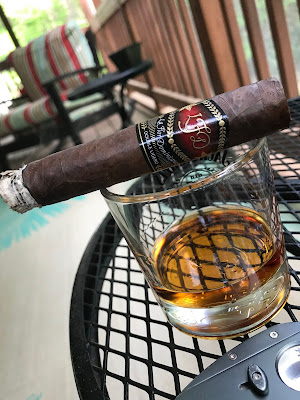 As is obvious from the above photo, my beverage choice soon changed. After smoking the cigar for a bit, I realized it really needed a pairing stronger than water. I grabbed a bottle of Woodford Reserve Double Oak and poured a wee dram. Perfect. In fact, I added a few more pours before the smoke was complete. The strong espresso, dark chocolate and cedar notes complimented the oaky richness of the Bourbon in a wholly satisfying manner.

Despite ongoing pandemic pandering, there are signs of a return to normalcy and commonsense appearing. Getting out and about, though to a limited extent, and enjoying a number of my guilty pleasures over the weekend was a welcome respite. The upcoming week looks to be cooler and wetter, which will be beneficial to the new plantings. I am stuck inside working anyway. Here's looking forward to next weekend, which happens to be a three day break. There might even be a return to shooting in store!