It was a cool morning as I headed to Charlottesville to shoot the monthly IDPA match at the Rivanna range. It's been a while since we've had a cool weather match, and I had mixed feelings about being reminded (again) about the impending months of lower temps. Nonetheless I was looking forward to shooting the match and visiting with friends.

All four stages this month involved little movement, other than some leaning to see around obstacles. Although I prefer movement stages, the stages were both fun and challenging. The first stage had us facing three tiers of target groups, each with three threat and two non-threat targets in a line. The groups were shot near to far. 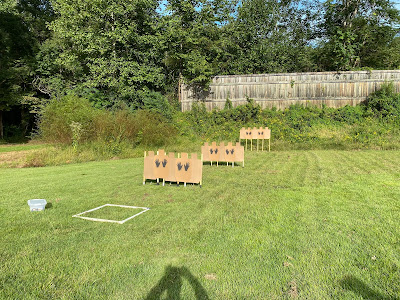 It so happened that the shooting order had me following a multi-division Grand Master USPSA and Master IDPA shooter. That invoked no small amount of "no pressure" joking from my squad mates, and even the SO. In truth, I think the situation took some of the pressure off my shooting since I had no stress whatsoever of matching his speed. He was fun to watch and learn from though.
I got my match off to good start, shooting just one down with a raw time of 15.55 seconds, which was still almost twice a slow as the GM's raw 8.67!
The next stage had six targets placed at varying distances, with a couple non-threats up close to shoot around. We started the stage by using both hands to knock over a target stand placed right in front of the shooting box, blocking the view of the targets. 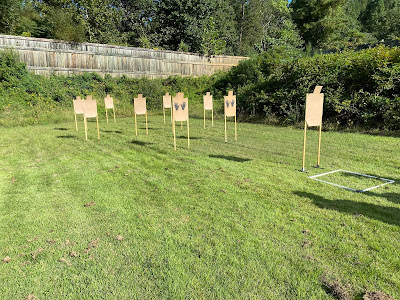 After the requisite "no pressure" ribbing, my turn came and I shot the stage just one down. Or so I thought at first. Upon closer examination, I saw I had knicked a non-threat, apparantly with my "throwaway" 11th shot on the fifth target, likely from moving too quickly to get to the reload and next target. Despite that, I was still pleased.
Rounding the corner to the third stage, we spied the infamous red pickup truck that always adds a bit of challenge and interest to a stage. I has been a while since I've seen this prop towed out. The loaded gun was placed in the truck bed, and all shooting was done from a small area behind the real wheel. There were five threat targets to engage with three shots each, and two non-threats to avoid. The placement of the non-threats, brought them into play on every shot. I shot the stage down 2, and was pleased to avoid the penalty targets. 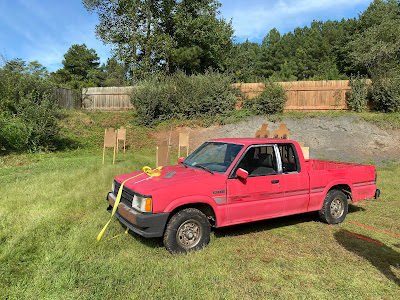 The last stage had an interesting setup and stage brief. There we saw a simple line of nine distant and open targets, spread in a row with the targets getting closer to us toward the ends of the row. (Aaargh, no picture.) The twist was that the arrangement was meant to represent two assailants moving in opposite directions in an effort to flank the shooter. The targets were to be shot far to near, which also meant swinging back and forth to shoot opposite sides of the array.
I'd had a pretty good match up to this point. Sadly, the wheels fell off the bus on this stage. We had a lot of time to watch shooters on the stage, and I witnessed a number of raised fingers indicating PE's when a shooter engaged the targets out of order. My time leading up to my turn to shoot was focused on shooting order — I didn't want to be one of those. Fortunately I shot without error. Unfortunately I focused too much on what target was next, and not enough on my sights. I made all the hits on paper, but finished -11 points for the stage. Even while shooting there were times I thought about a make up shot, but I think my brain was too focused on where I would shoot next. Still it was fun.
A combination of quick stages and low attendance, meant we finished shooting in about two hours. The stages were all interesting. Despite a couple errors, I managed 11th of 41 overall, and 4th of 22 SSP. It goes to show, "stand and shoot" can be interesting AND challenging. The weather was pleasant and the people were fun. All in all, a great way to spend a Saturday morning on the last official weekend of summer.
Mused by David
Email ThisBlogThis!Share to TwitterShare to FacebookShare to Pinterest