A Guinness and BLTC Last Rites

After the rain storms on Friday, the holiday weekend weather forecast couldn't have been more enticing. Sunny, cool days followed by cooler nights were prognosticated. That certainly came to pass on Saturday. By mid-afternoon I could resist the call no more and headed to the deck. Raise the umbrella to block the sun's glare, put the cushions on the chairs, grab an e-book, and it was time to settle in with a drink and a smoke.
A Black Label Trading Company Last Rites and can of Guinness Draught would make a nice afternoon refreshment. 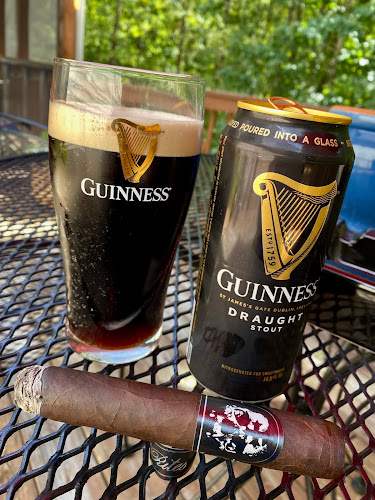 The Last Rites is a well-rolled 6" x 60 Grand Toro with a dark Ecuadorian Habano wrapper. The binder is Honduran and the filler is a tasty blend of Honduran and Nicaraguan leaves. It's a full bodied smoke with notes of creamy chocolate, coffee, and cedar throughout. The large ring gauge cigar burned evenly and cooly. This is a cigar I reach for frequently at the lounge, and also bring home regularly. 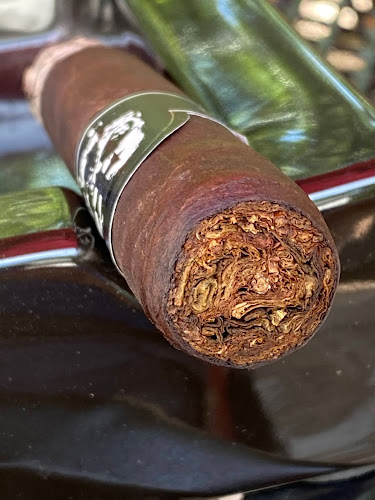 I was never, and still am not, a fan of bottled Guinness. The flavor just doesn't appeal to me on the few occasions I was offered a bottle. That said, I absolutely loved the Guinness we drank on our visits to Ireland, and accepted that I'd only drink it abroad. Then a friend urged me to try to Draught cans with the nitro capsule. I admit it, this is the next best thing to getting it in Ireland or at least proper Irish pub here at home.
The smooth, creamy Irish Stout made a perfect companion to the dark yet creamy notes of the cigar. Like the cigar, the beer offers a nice balance of bitter roast and sweet malt. Neither wiped out the flavor of the other. The slow burning cigar would provide a solid two hour smoke. That provided enough reason to open another another can of the stout. At just 4.2% ABV, it was an easy choice.
Colleen sound joined me on the deck to do some reading and enjoy a beer as well. We read and talked as the evening approached. Soon, the hungry mosquitos began arriving. We realized we've not really had them much this summer. Then again, until this cooler weather, most of our time has been spent inside the screened porch. I guess it's time to get out the citronella candles.